The Audi A1 offers decent performance and competent handling

The Audi A1 feels like a 'small big car' on the road. In other words, it seems comfortable and grown-up compared to the more frantic MINI hatchback. It's less exciting to drive as a result, while the Ford Fiesta and DS 3 are also more fun, even if they don’t have the Audi’s upmarket feel.

Nevertheless, the A1's steering is responsive and it can certainly be an enjoyable car to drive along a winding road. The suspension is quite firm on the SE model, but firmer still on the S line trim, which can crash over bumps and is generally quite uncomfortable. Luckily, Audi will let you 'delete' the stiffer suspension for no cost if you prefer the more comfortable setup of the SE model.

Perhaps surprisingly, the Audi A1 SE with a small 1.0 or 1.4-litre TFSI petrol engine offers the best blend of comfort and handling for Britain's potholed roads – so these are the models we recommend. Acceleration from 0-62mph in the 1.0-litre TFSI takes 10.9 seconds and it's much quicker with the 1.4-litre TFSI, taking 8.8 seconds. 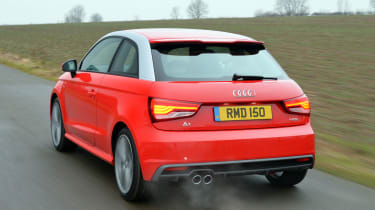 The 94bhp 1.0-litre turbocharged petrol is refined and responsive, while the noise it makes doesn't intrude into the cabin too much. It delivers enough power to feel very nippy around town and is only sluggish if revs drop below 1,500rpm, where the turbo isn't as effective. Even then, the engine quickly picks up speed and remains quiet as you accelerate.

More reviews for A1 hatchback

The 1.4-litre is quiet and smooth – it's the standout engine in the A1 range in performance terms. With 123bhp, it's fairly smooth and quiet, but not as powerful or as flexible as newer three-cylinder engines in the MINI Cooper and DS 3.

The 1.6-litre diesel manages 0-62mph in 9.4 seconds, but it doesn't feel as smooth as the petrols. However, it makes more sense if you plan on making a lot of long motorway trips.

Five-speed manual gearboxes are fitted to the 1.0-litre TFSI and 1.6-litre TDI, while every other version has either a six-speed manual or seven-speed S tronic automatic gearbox. The S tronic can shift gears very fast and works well on the move, but can be a little jerky during low-speed manoeuvres.

The Audi S1 is a very different proposition. It's the only A1 fitted with Audi's legendary quattro four-wheel-drive system and has a 2.0-litre petrol engine taken from the VW Golf GTI that produces 228bhp. It launches itself to 62mph from rest in 5.8 seconds and is limited to a top speed of 155mph. That's sufficient to keep up with an entry-level Porsche Boxster, as well as providing more grip than you'll likely ever need.