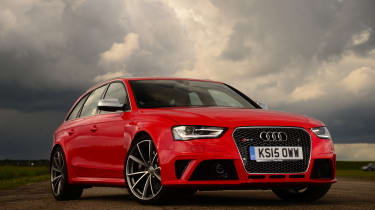 The Audi RS4 Avant was a performance-orientated version of the previous-generation Audi A4 Avant estate car. It came with a 4.2-litre engine, which produced 444bhp and gave the RS4 serious performance. 0-62mph took just 4.7 seconds, while Audi’s quattro four-wheel-drive system provided reassuring grip. A BMW M3 saloon is ultimately a more enjoyable car on a twisty backroad, but the Audi RS4 Avant offered a greater degree of practicality and was better to drive than the (also discontinued) Mercedes C63 AMG Estate.

The all-new Audi A4 is likely to be offered in RS4 guise soon, but for now, if you wand a mid-sized estate car with a serious turn of speed, a nearly new RS4 remains an enticing prospect. If your budget can stretch to it, the larger Audi RS6 Avant may also prove tempting.

With so much power on offer, it’s no wonder the RS4 is expensive to run. Fuel consumption of just 26.4mpg meant you’d quickly accrue petrol-station loyalty points, while CO2 emissions of 249g/km made road tax £500 a year and company car drivers were liable for a top-rate Benefit-in-Kind rate of 37%. Insurance, tyres and servicing also required deep pockets.

Performance-orientated Audis have always been fast, but they’ve also been criticised for a slightly uninvolving driving experience. The RS4 Avant didn’t quite offer the same amount of engagement as a BMW M3 – its steering doesn’t have as much ‘feel’, for instance – but it was a great improvement over older RS models. The seven-speed S tronic automatic gearbox and four-wheel-drive system meant it was easy to make use of the 4.2-litre engine’s 444bhp, with 0-62mph taking just 4.7 seconds and the top speed limited to 155mph. There was even a launch-control system, so making high-speed getaways was a simple (if hair-raising) prospect. Audi’s Drive Select system, meanwhile, allowed you to fine-tune the behaviour of the steering, exhaust and accelerator, depending on how you wanted the RS4 to behave.

The RS4 had a sporty yet practical and comfortable interior

The RS4 Avant adhered to Audi’s high standards when it came to interior quality. The new A4 has a more modern dashboard, but inside the RS4 was well designed, beautifully made and easy to use. Despite the car’s stiff sports suspension and large 19-inch alloy wheels, potholes and broken tarmac didn’t cause too much judder – although it was less comfortable than a standard A4. The sports seats were firm, but not too firm, while they also provided good support – something you’d come to appreciate when cornering at speed.

Despite being as quick as a Porsche, the RS4 was also a sound proposition for families

The Audi RS4 was only available as an Avant estate and had a 490-litre boot. The back seats could be folded down for trips to the dump or DIY store, while head and legroom were generous, both in the front and rear. The optional ‘bucket’ style seats offered even more support, but some drivers found them to be too tight and they also ate into rear legroom.

On stepping into an Audi RS4 Avant, there was no doubting you were in a high-quality car. The dashboard featured plenty of soft-touch plastics and everything felt built to last. That said, Audi’s reputation for reliability isn’t as strong as its overall badge appeal – something attested to by its 21st-place finish (our of 32 manufacturers) in our 2016 Driver Power customer satisfaction survey. Being fair, though, in 2015 (the last year the RS4 Avant was on sale) Audi did better, coming in 13th place overall.

The standard A4 received five stars in its Euro NCAP crash tests, while wide tyres and four-wheel-drive meant grip was excellent, so overall the RS4 was a very safe car. You could even specify carbon-ceramic brakes for improved stopping power – technology that was once the preserve of racing cars.

The RS4 came with a good amount of standard equipment, but options were expensive

All RS4 Avants came with leather sports seats, 19-inch alloy wheels and sat nav, but adding options could add thousands (if not tens of thousands) of pounds to the purchase price. The Sports package was a case in point: at £2,250, it was an expensive extra, even if it included larger alloy wheels, stiffer suspension and a sports exhaust. 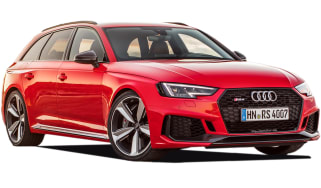