"The Mercedes-AMG C63 Estate offers the same muscular appeal as the saloon, but with more flexibility and, arguably, better looks" 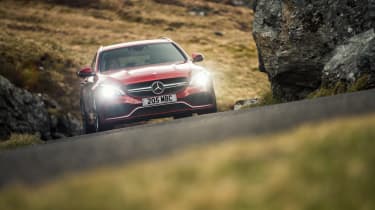 The Mercedes-AMG C63 saloon needs little introduction as the most muscular member of its family and the C63 Estate packs the same tyre-shredding power into a more family-friendly shape. The longer roof makes it a close rival to the Audi RS4 Avant (which only comes as an estate) while the saloon battles the BMW M3, which is only available as a four-door saloon.

If you fear the Estate's sensible shape tones down the C63's wild tendencies, you can rest easy. The same 4.0-litre, twin-turbocharged V8 engine is under the bonnet, sending 469bhp to the rear wheels, or a jaw-dropping 503bhp if you go for the C63 S model.

Do this and your 'sensible' estate car will reach 62mph from rest in four seconds flat – fast enough to catch several supercars napping. It only just matches the Audi RS4 here, though – despite having more power, it lacks its rival's four-wheel-drive system, which makes a big difference to how it feels in corners.

Where the Audi is planted and secure above everything else, the Mercedes has a savage side that adds to its ability to excite – lurid powerslides are easily provoked. Not that it's a hard car to control; it's actually fairly docile when kept on a tight leash and is far from intimidating.

Inevitably, the C63 costs a small fortune to buy and run, although it narrowly beats the RS4 on fuel economy. Actually, given its performance, 34.5mpg isn't as disastrous as you might expect, but insurance, maintenance and road tax mount up. The same is true of the saloon, but the bigger boot and greater rear headroom of the Estate make it easier to live with.

We reckon its gracefully swooping roofline makes it better looking, too, and the thought of an estate car that can readily smoke its tyres at traffic lights is a pleasingly mischievous one. Perhaps this is one reason that there's always a steady secondhand demand.

You'll have fun behind the wheel, but will never stop paying for it

With a starting price above £62,000, the C63 Estate is a full £15,000 more expensive than the next car down the price-list, the still-quick C43. And once you've forked out all that money, the bills keep on coming.

A 34.5mpg thirst for fuel gets running costs off to a pricey start and a 197g/km CO2 emission figure means anyone fortunate enough to claim a C63 as their company car faces the maximum 37% Benefit-in-Kind (BiK) tax bracket. Road tax, meanwhile, will cost £450 a year until the car reaches its sixth birthday, after which it reverts to £140 a year.

Keeping the C63 in first-class condition will be costly, too – although a basic oil change won't cost much more than any other big-engined Mercedes, other aspects of maintenance certainly will. Mercedes offers special AMG service contracts and these can help you contain the cost of servicing, but 'wear-and-tear' parts such as tyres, brake discs and pads can be very expensive.

Finally, you'll need to budget for group 50 car insurance, which can vary in cost enormously depending on your location and driving record. We recommend that you seek an insurance quote before you commit to buying a C63.

There is good news, though, in the fact that a C63 Estate should hold on to a healthy chunk of its value after three years, such is the model's desirability on the used market.

Like any AMG Mercedes, the C63 Estate's driving experience is dominated by its monstrous 4.0-litre twin-turbocharged V8 petrol engine. Its 469bhp enables a 0-62mph time of just 4.1 seconds and an electronically limited top speed of 155mph. Pay for the AMG Driver's Package, though, and this is increased to 174mph – 6mph less than the saloon, but enough to make it one of the fastest load-luggers you can buy.

Opting for the C63 S boosts the engine to a breathtaking 503bhp, but only drops the 0-62mph time by a tenth of a second. The rival Audi RS4 accelerates at pretty much the same rate, despite being considerably down on power with 444bhp, but it has the advantage of four-wheel drive to help apply its power to the road. The AMG relies solely on its rear wheels, which is arguably the key to its thoroughly intoxicating driving experience. 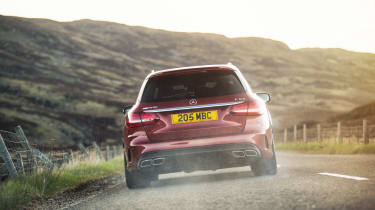 While the Audi is locked to the ground by its four-wheel-drive system and offers something of a super-fast arcade-game thrill, the Mercedes is far more involving. Its steering is as responsive as you'd want and the front tyres bite hard in corners, giving you loads of confidence on a challenging country road.

This is helped by the clever traction-control setup that keeps the car under control even in wet conditions, but doesn't cut the power obtrusively like the systems of some fast cars do. It makes it easy for anyone to have real fun behind the wheel, while an experienced driver can unlock the opportunity for beautifully controllable slides by switching these systems off.

All this is achieved with barely a hint of body lean, and a driver would be hard-pressed to feel the difference between the estate and saloon if they drove both back-to-back. Both offer the same fun, the same fearsome power and the same spine-tingling muscle-car soundtrack.

It's plush, well built and well equipped, but too firm to be called comfortable

With its leather-lined and gadget-laden interior, the C63 Estate could be truly luxurious if it wasn't for one failing – the ride quality. Firm suspension keeps its body free of lean in corners, but makes little attempt to absorb road imperfections. The shallow sidewalls of its 18-inch wheels do little to soften pothole impacts, either. This car likes smooth roads.

Take the bumpiness away and the rest is good news for passengers. There's little wind noise, even at speed, and the huge tyres keep their voices down, too. Even the engine calms down to a tolerable hum when the adrenaline isn't flowing, although its hearty bellow will easily drown out the stereo under full acceleration. 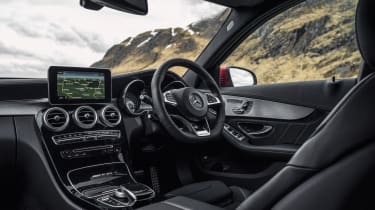 When not exploring the handling limits, there's plenty of standard kit to play with. C63 buyers get Mercedes' COMAND Online infotainment system with DAB radio, wi-fi and 3D mapping, displayed on an 8.4-inch screen. Step up to the C63 S and you get a Track Pack, which can use your smartphone or a GoPro camera to record and share your circuit exploits, as well as a different flat-bottomed AMG Performance steering wheel and 'Performance Seats' with adjustable side bolsters.

Outside, the two are set apart by the colour of their brake calipers and the size of their alloy wheels – silver and 18-inch on the C63, red and 19-inch on the C63 S. Both have a relatively subtle AMG bodykit with a deeper front bumper than the regular C-Class, although the gaping air intakes leave onlookers in little doubt as to what this machine is all about.

Just as useful as the saloon, but with a more versatile boot

It's really more likely that buyers will choose the C63 Estate for its image than its practicality, but it nevertheless makes a more useful car in daily life than the saloon. Both cars offer the same amount of space for people, but the estate is more adept at carrying their possessions.

With power-adjustment for both front seats and the steering column, as well as memory settings for each, finding a decent driving position won't take long. Once installed, there's plenty of space for driver and passenger to travel in comfort and all-round visibility is good – other than the rear three-quarter view, which has a sizeable blind spot caused by the rearmost window pillars, darkened side glass and rear head restraints. The C63 saloon is consequently easier to maneuver, but a reversing camera is standard, anyway. 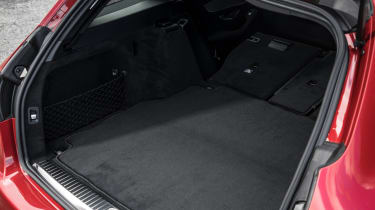 The estate does have a slight advantage in rear-seat headroom, thanks to its less rounded roofline. No C-Class is especially generous on rear-seat legroom, though, and the C63 is no better, especially when the bulkier Performance Seats are fitted up front.

Of course, the boot is bigger than the saloon's, but only by 10 litres. That is until the 40:20:40 split-folding rear seat is dropped, which frees up 1,510 litres of space. It's useful as well as big, with load lashing eyes, hooks for bags and a 12v power socket.

Mercedes' reliability is no longer universally admired, but its safety does it credit

Time was that a Mercedes was sold on its engineering solidity more than anything else, and while there's little doubting the C63 Estate's build quality, owners aren't entirely sold on the reliability of cars with a three-pointed bonnet star.

While the model finished in a reasonable mid-table 40th position in our 2017 Driver Power owner satisfaction survey, it's worth noting that only a small proportion of C-Class owners who participated were likely to be C63 owners. Nevertheless, the range scored well for its powerful engines and strong acceleration, but handling didn't come in for much praise, nor did rear-seat legroom.

Fuel consumption was seen as particularly disappointing, and high service costs were condemned, and – with 12.9% of owners reporting at least one fault in the first year of ownership, reliability doesn't seem a strong suit, either. As a brand, Mercedes finished in a 'must do better' 21st position out of 27 brands covered in the survey.

The C-Class received the full five stars when it was crash-tested by independent experts Euro NCAP back in 2015. The testing regime has been made more demanding since then, but there are nine airbags on board and plenty of driver-assistance systems at hand to reduce the likelihood of a crash – autonomous emergency braking and driver fatigue warning are both standard. You can also add a Driving Assistance pack for £1,695, which includes active cruise control, active lane-keeping assistance and blind-spot monitoring.

Direct competition is limited, but there are some tempting sports cars at this price

Super-fast estate-car buyers with £60,000 to spend are limited to the C63 and the Audi RS4, both of which appeal in slightly different ways. You'd be hard-pressed to split the two in terms of cross-country speed, but the C63 offers a more 'hands-on' experience. Both models have their own loyal following – many will know which they prefer without reading any reviews.

If you want practical performance at this price point, there aren't many other places to look. But if carrying capacity isn't an issue, the field is opened to include the BMW M4 Coupe (and the Mercedes C63 Coupe, for that matter) along with two-seater sports cars such as the Porsche 718 Cayman and Jaguar F-Type. 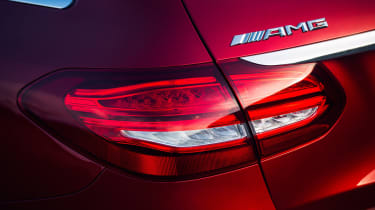 If the C63 Estate is the car for you, it can be tailored to your taste by spending a bit of time with the options list. As well as the many choices of exterior colour and interior trim, you can add visual enhancements such as a carbon-fibre pack. This costs £3,370 and adds the material to the lower front spoiler, sill extensions and rear diffuser. A carbon-ceramic brake system can be added for £4,285 and a performance exhaust for £1,000.

Since you're adding all this, you may as well include the £585 Night Pack, which deletes any remaining exterior brightwork in favour of a stealthy gloss-black finish.