No Audi Q5 feels slow, but the SQ5 lays down startling performance figures for a diesel SUV

Down a country road, there’s very little to distinguish the Audi Q5 from a standard Audi saloon. It doesn’t lean too much in corners and always feels responsive, but this comes at the cost of a stiff, uncompromising ride. This problem is particularly apparent in town, where large and medium-sized bumps and potholes make their presence felt inside.

The problem can be tackled (to a certain extent) by choosing smaller wheels (your options range from 18 to 21-inch) but whichever wheel size you pick, the Land Rover Freelander is still a more comfortable car. 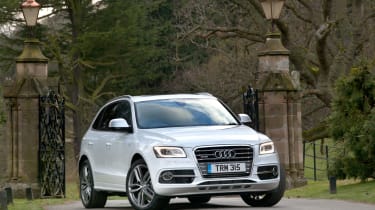 The Q5’s problems don’t end with its stiff ride – inconsistently weighted steering also takes away from the driving experience, as it switches from feeling heavy to light with very little warning.

If you decide to venture off the beaten track, the Q5 should cope well with some light off-roading. All models come with quattro four-wheel drive and have an off-road setting for their ESP (Electronic Stability Program). Hill-descent control, which keeps control of the car’s speed on steep inclines, is also standard, but the Audi lacks an equivalent to Land Rover’s Terrain Response System, which makes the Freelander easier to control in a variety of off-road environments.

All the engines offered in the Q5 are strong performers for this kind of car, but on paper, the 2.0-litre diesel models are quite a bit slower. The 148bhp version takes 10.8 seconds to get to 62mph from rest, but in the real world the gulf is less apparent, as the engine’s mid-range grunt masks its performance shortfall during normal everyday driving.

If you want more shove, you can always choose the 242bhp, 3.0-litre diesel, which can launch the car from 0-62mph in 6.2 seconds, despite being paired as standard with Audi’s seven-speed dual-clutch automatic gearbox.

For the ultimate performance, though, the options are clear – the 322bhp SQ5 or the 335bhp SQ5 Plus. Both cars have the same twin-turbocharged 3.0-litre diesel engine that gets them from 0-62mph in just 5.1 seconds. Both cars have stiffer suspension setups than the rest of the Q5 range for lower for faster cornering.

The 227bhp petrol model can cover 0-62mph in just 7.2 seconds when fitted with a manual gearbox, while choosing the automatic sees this time shrink to 6.9 seconds.