While the Audi Q5 offers some degree of off-road ability and better grip on slippery roads than a two-wheel-drive Audi A4, it’s the car’s airy interior that’s likely to hold the most appeal to family buyers. By virtue of its SUV status, the Q5 has a tall, upright body that frees up plenty of head and legroom, while giving the car a large and well shaped load area. The Q5’s hefty weight and four-wheel drive mean it also makes for a solid tow car.

The Audi Q5’s interior is impressively spacious, with plenty of room for four adults – plus a fifth at a push. You can also specify the optional Rear Seat Entertainment Pack (£1,050), which adds a pair of DVD players and screens that could prove invaluable for entertaining children on long journeys.

There should be plenty of room in the front and back for passengers and there’s extra space in the back for the middle-seat passenger’s feet.

In the front, there’s a sizeable glove compartment, a large central storage cubby and big door bins. Audi will even fit a cup-holder (for £100) that can keep drinks hot or cold as appropriate. 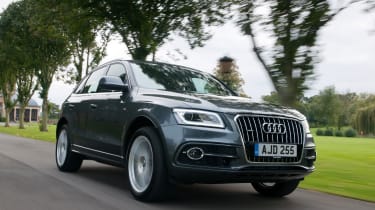 With all of its seats in place, the Audi Q5 has 540 litres of boot space, which is more than you get in the Volvo XC60 and just marginally behind the BMW X3. Fold the rear seats down and maximum capacity increases to 1,560 litres.

There’s barely any boot lip to lift heavy items over and the back seats also fold down almost completely flat. You can also choose useful options such as a reversible boot floor with a wipe-clean side (£70) or underfloor storage (£145) to make the car even more practical.