Alloy wheels, air conditioning and plusher trim start to appear when you get to mid-range Edge specification, but the cheapest version comes close to £11,000. 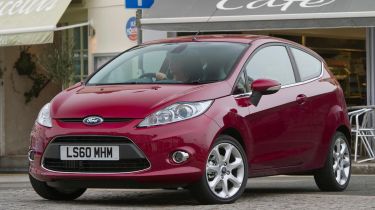 Edge is effectively a better-trimmed, better-equipped version of the Style model that sits one step down in the range, but it comes at a considerably higher price. It offers the same four engines as the Style – 59bhp and 81bhp 1.25-litre petrol units, a 95bhp 1.4-litre petrol option and a 69bhp 1.4 diesel. There’s also a fuel-saving Econetic model with a specially tuned 94bhp 1.6-litre diesel, lowered suspension and aerodynamic changes which together cut emissions to 98g/km, so you pay no road tax and can theoretically achieve 75mpg. Fifteen-inch alloy wheels are standard with Edge trim, and they add an extra touch of sharpness to the Fiesta’s acclaimed handling and looks. There’s also manual air conditioning that’s not even an option lower down the range, while quilted upholstery and silver trim highlights brighten up the interior.

The Fiesta is far and away the best supermini to drive, and one of the smartest-looking, too. Arguably, its design has influenced other superminis that have followed in its wake, such as the new Kia Rio. Both of these attributes are made all the better by the 15-inch alloy wheels with Edge trim: they make the car a little more nimble and softer over bumps, and even more stylish. There’s an engine to suit just about every supermini need. For buyers downsizing from larger cars, standard items such as air conditioning, a trip computer and the potentially life-saving feature of electronic stability control will be regarded as essentials. The Econetic model delivers on its economy promises, but is expensive to buy.

There’s no getting away from it: the Fiesta is not big on practicality and just a little disappointing on interior trim quality. Rear legroom is barely adequate for anyone other than small children, so unlike some rivals such as the VW Polo and Vauxhall Corsa, it won’t make the grade as a family car, and the seats don’t fold flat when you want to enlarge the boot. The cabin plastics don’t have the soft-to-the-touch quality you get with, say, a Volkswagen Polo, either. This is especially disappointing when the cheapest version of the Fiesta Edge is nudging £11,000.

Ford Fiesta Edge is available with the same four engines as the Fiesta Style, but we see no reason to deviate from our choice there – the 81bhp 1.25-litre petrol unit.