The Honda Jazz Hybrid is most efficient model, but it’s expensive, and there’s no diesel option to help reduce range emissions and boost economy

The Honda Jazz Hybrid is most efficient model, but it’s expensive, and there’s no diesel option to help reduce range emissions and boost economy.

The Honda Jazz isn’t available with a diesel engine, so it isn’t the most economical supermini around. The 1.2 and 1.4-litre petrol models feature a five-speed manual gearbox, while a CVT automatic gearbox is optional on the 1.4, but all versions trail class-leading rivals when it comes to fuel economy and CO2 emissions. Add that to high prices across the range, and the Jazz won’t be an especially attractive choice as a company car, either.

The entry-level Honda Jazz, the 1.2 S, has claimed fuel economy of 53.3mpg and CO2 emissions of 123g/km. The 1.2 SE gets a stop-start system, which turns off and restarts the engine automatically in stop-start traffic. This improves fuel economy to 54.3mpg and emissions to 120g/km. Road tax for this model costs £30 a year, compared to £105 a year for the rest of the petrol line-up. 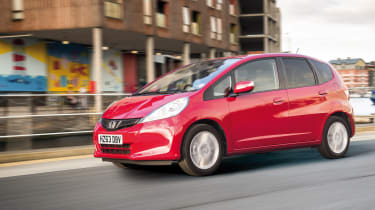 The 1.4-litre engine has stronger performance, so the manual version’s 50.4mpg and 129g/km figures will be a worthwhile compromise for many drivers.

The CVT automatic gearbox improves on that slightly, promising 51.4mpg and 128g/km, although the sluggish responses of this gearbox hamper the car’s performance. There is a real lack of urgency when you put your foot down and a long wait for the engine's power to arrive.

The CVT is the only transmission option on the Jazz Hybrid, which doesn’t help its appeal, although the gearbox isn’t the only drawback for the petrol-electric car. While it’s more fun to drive than other Jazz models, it’s very expensive. And then there are the economy figures – which should be the key selling point for a car with this eco technology.

Even though the Hybrid is easily the most efficient Jazz in the range, its fuel consumption and emissions figures aren’t brilliant, especially as it doesn’t feature stop-start to pause the engine when you’re stopped at traffic lights. Honda claims 62.8mpg, while the car doesn’t even dip below the magic 100g/km CO2 emissions barrier that means exemption from road tax.

It emits 104g/km, which simply isn’t good enough for a hybrid these days, especially when you compare it to the other petrol-electric supermini available, the Toyota Yaris Hybrid. This has claimed fuel economy of 85.6mpg, while CO2 emissions are 75g/km for the most efficient version.

For the regular Honda Jazz, insurance group ratings range from group 13 to 19, while the Jazz Hybrid sits in group 16 or 17. In contrast, the Ford Fiesta is rated from as low as insurance group three and the Hyundai i20 from group four.

The Jazz benefits from a variable service schedule, so the service indicator will flash up when the car needs to be taken to a dealer for a check-up. The frequency of services depends on how the car is driven. As with many of its rivals, Honda offers a pre-paid, fixed-price servicing scheme for £700 – the five-year/62,500-mile package looks reasonable value when compared to the £750 five-year deal on the Hyundai ix20 and £600 three-year offered on the Ford Fiesta. The new Nissan Note is available with a £200 three-year servicing deal, however.

The manufacturer warranty on the Honda Jazz is more generous than on many superminis, as the three-year package covers the car for up to 90,000 miles. Rivals such as the Ford Fiesta and Nissan Note have standard three-year/60,000-mile deals. However, the Jazz is still left trailing by the Hyundai i20, with its five-year/unlimited-mileage warranty (although you can pay for an extended five-year warranty) and the Kia Rio, which has a seven-year/100,000-mile package.