“The Honda Jazz has a class-leading boot and the most spacious interior of any supermini, thanks to its tall roof and upright stance”

The Honda Jazz is a practical supermini that competes with a long list of popular small cars, including the Ford Fiesta, Vauxhall Corsa, Volkswagen Polo and Peugeot 208. Park the Jazz next to any of these and you’ll notice the Honda is a little different.

For starters, the Jazz is designed for the maximum amount of interior space within typical supermini dimensions. It’s taller and boxier than rivals and has a small engine bay, all of which help increase interior space to give passengers in the back a surprising amount of legroom. The Jazz drives more like an MPV than a supermini but the steering is light and the driver has great visibility.

The best small cars and superminis you can buy today

Honda updated the Jazz in 2018 with the latest Honda family look, giving it new bumpers a wider front grille and redesigned headlights. The engine range benefited from the addition of the 1.5-litre petrol engine that was already in use in the Civic. It went into a Jazz Sport model that has now been discontinued. As of early 2020, Jazz buyers can only choose between S and SE trim levels as Honda gears up for the replacement model. 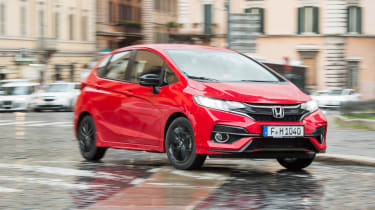 The Jazz is best known for being impressively practical and versatile. Its defining features are a raised seating position, back seats whose bases hinge upright to create a load space for tall objects between the floor and roof lining and a competitively sized 354-litre boot. Lower the split-folding rear seats and this becomes a 1,314-litre luggage space, sufficient for most reasonably sized loads.

Given the Jazz’s appetite for carrying people or loads, or both, it’s a pity its entry-level engine isn't more powerful. The 1.3-litre petrol produces only 101bhp. Unlike an increasing number of small, modern petrol engines it’s not turbocharged, so often feels quite strained beyond anything more than gentle driving.

You can have this engine in your Jazz with a manual or automatic gearbox. The latter is what’s called a CVT. These are known for a slightly strained-sounding and high-revving character, which can feel a bit like slipping the clutch in a manual car. For this reason, we’d only recommend the CVT if you plan on driving in town traffic. 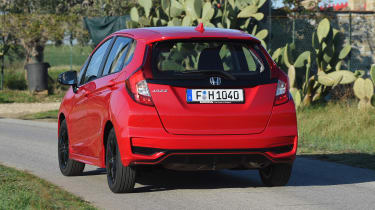 We prefer the manual, because it makes better use of the available power and is slightly quicker from 0-62mph (11.2 seconds) than some versions of the automatic. That said, the CVT is more efficient with figures of up to 60.1mpg and 106g/km CO2, compared with the manual’s 55.4mpg and 117g/km CO2.

Many people are attracted to the Honda by its reliability record. The Honda Jazz finished 62nd out of the 100 cars ranked in our 2019 Driver Power owner satisfaction survey of cars currently on sale in the UK.

The Jazz was given five stars in independent Euro NCAP crash-tests and it’s fitted with a full roster of airbags, electronic braking and anti-skid technology. The Jazz will warn you if a tyre loses pressure, has ISOFIX mounting points for child seats and features as standard a system that’ll brake automatically at low speeds if a collision is deemed imminent.