The Hyundai i10 is competent but not exciting, with capable engines and a smooth gearbox

A mid-life update for the i10 a couple of years ago saw some small changes made to the car’s running gear, with new suspension components fitted to help it cushion passengers from lumps and bumps in the road.

The steering was also improved to make it more accurate, but it hasn’t made the i10 particularly dynamic; it’s still not a very exciting or engaging car to drive. However, this doesn’t detract hugely from the car’s appeal around town, where the combination of high driving position, excellent visibility and light controls makes driving and parking a breeze.

The power-assisted steering doesn’t feel as good the Skoda Citigo’s but it’s direct and accurate, plus there’s much more grip than in a Fiat Panda. As a result, the i10 feels composed and capable through a series of corners without being thrilling.

Although the Hyundai i10 isn’t particularly fast on paper, the model’s compact dimensions and light weight make it feel very nippy, particularly when you’re navigating tight city streets. The smaller engine is of course slower, and occasionally requires a bit of forward planning before overtaking or tackling a steep hill. It produces 66bhp and takes 14.7 seconds to get to 62mph from a standstill, which is roughly the same as the equivalent Skoda Citigo. 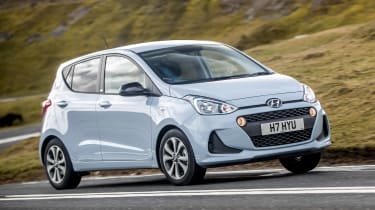 The 86bhp 1.2-litre is the i10 model to go for if you’ll be driving on the motorway regularly. It does 0-62mph in a significantly quicker 12.1 seconds and feels more comfortable at higher speeds. If you do opt for the automatic 1.2-litre model it’ll feel significantly slower with a 0-62mph time of 13.8 seconds.

It’s a shame that Hyundai has yet to introduce a small turbocharged engine to rival the engines in alternatives, such as the 1.0-litre engine in the Volkswagen up!, as they generally don’t need to be worked as hard and aren’t any less economical.

We wouldn’t recommend the automatic gearbox (only available with the 1.2-litre engine), as it only has four gears, denting the i10’s performance and fuel economy, while the standard manual transmission changes gear smoothly and makes the i10 fun to drive. Excellent brakes and light steering complete the i10’s impressive city-car attributes.