The Hyundai i10 incorporates well-proven technology which should be trouble free. Hyundai wasn't rated as highly for reliability as previously, but only a small proportion of owners reported faults. 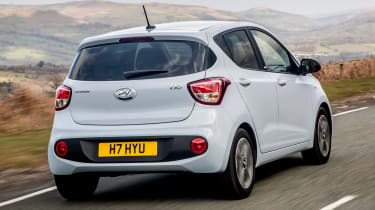 The Hyundai i10 came 82nd out of the top 100 models in our 2019 Driver Power owner satisfaction survey. Of the owners who responded, few reported experiencing a problem with their car at least once. Owners praise the low running costs of the i10 and its build quality, but score it down for practicality and its dated infotainment system.

The current i10 was one of the first cars to be crash-tested under more stringent Euro NCAP rules, which helps to explain why it only received a four-star rating rather than the five achieved by the Skoda Citigo and its VW and Skoda sister models in 2011. The i10 comes with six airbags, electronic stability control and tyre-pressure monitoring system as standard across the range.

The facelifted i10 is now available with a Driver Assist Pack in SE trim and above, adding lane-departure warning and forward collision warning to alert you if the car drifts out of lane or an impact with a vehicle or object ahead is deemed likely.