Engines are fairly responsive, but the Hyundai i20 isn’t as much fun as Ford Fiesta

If you're a keen driver, the Ford Fiesta, Mazda2 and Suzuki Swift all offer a more entertaining drive than the Hyundai i20. However, Hyundai is constantly improving the way its cars ride and handle, thanks to an exhaustive programme of testing on European roads, including those in the UK.

That means the i20 still has some strengths. Most notably, it's very quiet and refined on the motorway and feels as stable as a car from the class above. However, around town and at slower speeds, the i20 has a firm and quite uncomfortable ride, especially if you hit a deep pothole or sharp speed bump. 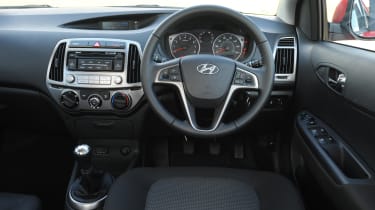 The steering isn't always consistent, either, meaning the car doesn't always follow the line you expect when negotiating bends at speed. Diesel models can be a bit noisy around town, too.

The 84bhp 1.2-litre petrol engine comes with a fairly slick five-speed manual gearbox only. It goes from 0-62mph in 12.7 seconds and has a top speed of 104mph. These are reasonably competitive figures in the class, and this engine provides more than enough performance, especially if you predominantly use the car around town.

The 98bhp 1.4-litre petrol engine's performance is blunted by its automatic gearbox, meaning it takes almost 13 seconds to reach 62mph from a standstill. And there isn't much fun to be had achieving that speed, either.

You'll need to work the 1.4-litre diesel engine hard to match the official 13.5-second 0-62mph time, and it'll make quite a lot of noise while doing it. Once you're up to speed, though, it quietens down and is reasonably refined. But if you're only pootling around town, the smoother and quieter 1.2-litre petrol engine gets the nod.