Although the Hyundai i20 has a very functional interior, with easy-to-use controls, its design still lags behind the competition. The cabin is one of the least interesting in the class, although an update in 2012 did liven things up a bit. However, the i20's interior does have an overall feeling of solidity and should withstand most of what owners and their kids can throw at it.

The tiny clock on top of the dashboard looks pretty dated, while the stereo controls look like they were borrowed from a budget portable hi-fi. The heater controls are a bit shiny and plasticky, too, while the indicator stalks and electric window switches feel cheap. 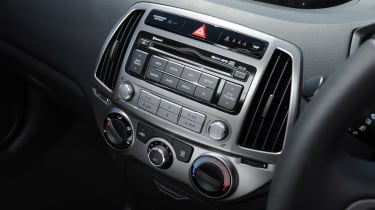 There's nothing wrong with that in itself, but the i20 lacks the upmarket and aspirational feel you get with a slightly more expensive Ford Fiesta or even the i20's sister model, the Kia Rio.

Hard-wearing cloth upholstery is standard on all models, as is a cigarette lighter – although these days the latter is more likely to be used for charging the wide range of electronic gadgets that accompany the modern road trip. 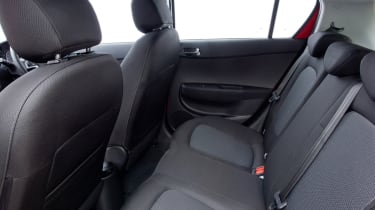 Oddly, the lower-spec i20 models include electric windows that have a one-touch operation for lowering the window, but not for closing it again – you have to have an Active or Style model to get that function. Likewise, the electric window on the driver's door doesn't stop automatically should something get trapped in it on the lower-spec models. 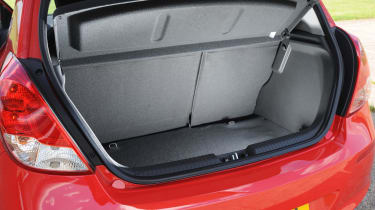 The top-of-the-range i20 Style has a huge amount of equipment – climate control, auto lights and wipers and parking sensors supplemented by a rear-view camera that has a display in the rear-view mirror are all included.

The only item on the options list is metallic paint, and sat nav isn't available. However, given the amount of scope for connecting smartphones across the i20 range, it seems Hyundai just accepts that most drivers will use their mobile device or a map to meet their navigational needs.