The Hyundai i20 handles adequately enough, but some of its engines feel underpowered

The Hyundai i20 is pleasant enough to drive, but some of its engines feel a little lacking in power for comfort in today’s traffic. The i20 handles well thanks to its light steering and good body control, which stops the car from leaning too much when going around corners, but don’t expect to be entertained in quite the way a Ford Fiesta manages, nor to ride quite as comfortably as you would in a Volkswagen Polo.

Even the more powerful 1.2-litre petrol offered in the i20 is a bit gutless and takes a lengthy 12.8 seconds to accelerate from 0-62mph. The 1.0-litre petrol is a great improvement thanks to its 99bhp and low CO2, but it's more expensive to buy and only available in i20s in SE trim or higher.

It's also not quite as punchy or smooth as the 1.0-litre petrol in the Vauxhall Corsa but it is a big improvement on Hyundai's old 1.4-litre petrol. There’s also a 118bhp version of the 1.0-litre with a six-speed manual gearbox, which performs well, getting from 0-62mph in 10.2 seconds yet still returning up to 47.1mpg. 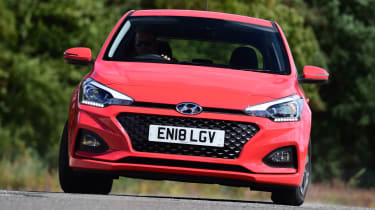 Hyundai introduced a dual-clutch automatic gearbox as part of the model update in 2018. If you're after a supermini with an automatic gearbox it isn't a bad choice; shifts are smooth and the gearbox doesn't make the car jerky at parking speeds.