"The Hyundai i20 is a roomy, affordable and attractive supermini, but keen drivers should look elsewhere"

The Hyundai i20 isn’t short of strong competition in the popular supermini class. Rivals include the bestselling Ford Fiesta, Renault Clio, and the stylish SEAT Ibiza and the upmarket Volkswagen Polo. The i20 is, however, still worthy of your consideration, and is arguably Hyundai’s best supermini to date.

The car boasts sharp looks, build quality is superb and a five-year warranty only adds to its appeal. The range was slimmed down in early 2020, with the sportier three-door i20 Coupe and ix20 mini-MPV withdrawn from sale. This review focuses on the more practical five-door hatchback.

Best small cars and superminis you can buy today

Hyundai reduced the number of engines in the i20 engine range, so that now there are only petrols available. A 1.2-litre petrol engine is offered in 74bhp and 84bhp outputs, the more powerful of which makes most sense, as the 74bhp version can feel particularly gutless. 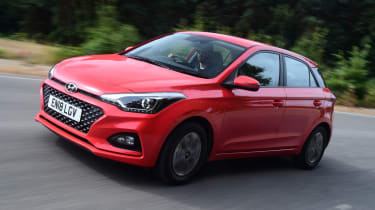 There’s also a more modern 1.0-litre turbocharged petrol engine available with 99bhp and 118bhp. This engine makes the i20 a much better all-round package, as both performance and economy are superior to the car when it has the 1.2-litre. The 99bhp 1.0-litre model is capable of up to 49.6mpg and the 118bhp returns 47.1mpg.

An update in the summer of 2018 saw some mild styling tweaks, including a move for the rear registration plate up from the bumper to the boot lid, and some extra paint choices consisting of new red, blue and grey colours. Some extra equipment was added to the entry-level car, including air-conditioning and a seven-inch touchscreen, and a panoramic sunroof became standard on the Premium SE Nav model. All i20s now come with Apple CarPlay and Android Auto too.

The i20 is easy to drive thanks to its light steering and a slick gearchange. The ride is smooth, too. It’s just a shame it’s not more fun, especially given its sporty, confident lines and squat stance. The Ford Fiesta and SEAT Ibiza are more entertaining on a twisty back road.

The i20’s interior looks a little bland, too, although like the Volkswagen Polo’s, it’s well built. However, where the Polo feels high-quality, the i20 is let down inside by some scratchy plastics. Its saving grace is its generous space, easily better than most rivals. It’ll seat four adults comfortably, while the boot is easily the biggest in the class.

There are several trim levels to choose from: S Connect, SE, Play, Premium Nav and Premium SE Nav. We like the mid-range Play special edition, which gives you all the essentials that feature on the SE, including DAB radio, cruise control, Bluetooth and rear parking sensors, plus 16-inch alloy wheels, sat nav and a contrasting black two-tone roof.

The Hyundai i20 range finished a respectable 29th out of the 75 cars ranked in our 2017 Driver Power owner satisfaction survey of cars currently on sale in the UK, but this dropped significantly to 68th place out of 75 cars in our 2020 survey.