Solid build quality and durable components bode well for the future, while a seven-year warranty adds peace of mind.

Kia as a brand finished our 2016 Driver Power owner satisfaction survey in 14th place out of 32 marques – not a bad result. Kia drivers overall are disappointed with the way their cars drive, with performance being ranked in 22nd place, but running costs are pleasingly low across the range, putting the brand in 12th place in that area.

However, the Picanto didn’t score as well as its bigger stablemates the Rio and Cee’d. It was marked down for poor performance, which isn’t surprising for a city car. Practicality was criticised, too, though: no doubt a reference to the small boot.

Owners can certainly take reassurance from the standard seven-year warranty that Kia offers, bettering all the competition. 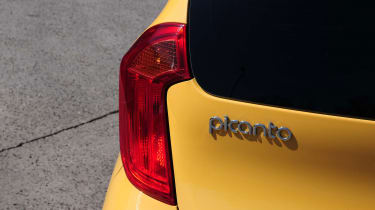 In 2011, the Picanto was awarded four out of five stars for safety by Euro NCAP. At the time, it was marked down for not having electronic stability control as standard – a feature that’s now fitted across the range.

Despite this, it’s worth bearing in mind all versions of the Picanto get six airbags, ISOFIX child-seat mounts, hill-start assistance and anti-lock brakes. You also get a passenger airbag on-off switch, adaptive brake lights that flash under hard braking and a trio of three-point seat belts in the back.