"The Kia Picanto is a handsome city car with equipment more often found in larger cars. It should prove affordable and hassle-free to run, too"

The Kia Picanto is a small city car that boasts the cheap running costs and nippy handling you expect in this class, but also has more kit than you may expect and a seven-year warranty for peace of mind.

It’s based on the same underpinnings as the excellent Hyundai i10 and offers impressive interior space, but is up against tough competition like the Skoda Citigo, SEAT Mii and Volkswagen up! along with another trio of similar models – the Citroen C1, Peugeot 108 and Toyota Aygo. If you feel adventurous, there’s also the quirky rear-wheel-drive Renault Twingo.

Under the bonnet, there’s a choice of 1.0 or 1.25-litre petrol engines, with the smaller version able to return up to 64.2mpg with stop-start technology fitted. It’s frugal, then, but not quick, taking a lethargic 14.1 seconds to get from 0-62mph.

The 1.25-litre feels more flexible – reaching 62mph from rest in 11.5 seconds – and partly because it feels less strained, it can still manage around 61mpg, making it a better all-rounder. 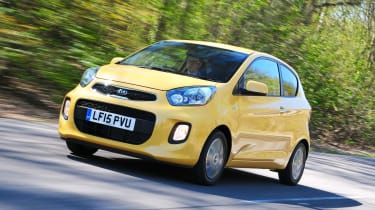 With a tiny footprint, the Picanto is as easy to maneuver as you’d expect, but it doesn’t offer the same driving fun as the best rivals. Soft suspension gives the Kia a smooth ride over most roads, but also makes it lean in corners and rock forwards and backwards under braking and acceleration. The Picanto is very easy to drive and feels safe, but the Volkswagen up! is more entertaining.

Interior space is impressive, with enough room for adults in the front and rear, particularly if you choose the practical five-door option. The boot sadly isn’t very big, but it is at least a useful shape. 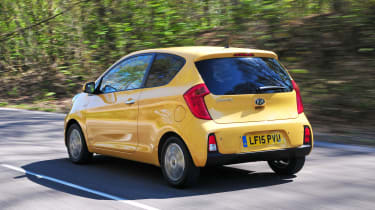 We expect the Picanto to be reliable, despite it finishing only 122nd out of 150 models in our 2016 Driver Power customer satisfaction survey. The Picanto came 78th in the reliability category and Kia came 14th out of 32 manufacturers overall. In crash-testing, Euro NCAP awarded the Picanto four out of five stars, with all models getting six airbags, hill-start assistance and a system to reduce braking distances during an emergency stop.