Owners have reported few problems with the Mazda CX-5 and it has an excellent safety rating, too

The Mazda CX-5 continues the Mazda tradition of producing dependable, owner-pleasing cars, with very few faults reported and generally strong results in customer satisfaction surveys. It also received top marks for safety from testing body Euro NCAP, helped in part by the fact that every model in the range gets the full complement of safety kit – not just the more expensive versions.

Mazda has long been known for producing robust and dependable cars, and the CX-5 looks set to continue that trend. Although its interior doesn’t look particularly classy, it does feel tough and well made, so it should be able to put up with several years of family motoring.

Owners ranked the CX-5 64th overall and 87th for reliability out of 200 models in our Driver Power 2015 customer satisfaction survey. In the 2016 results, the CX-5 improved to 49th out of 150 models overall, coming 82nd for reliability. Respondents seemed generally happy with its ease of use and practicality, but scored the CX-5 down for running costs and in-car technology. 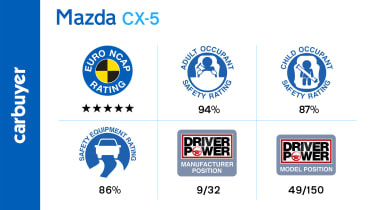 As an overall brand, Mazda was ranked ninth out of 32 manufacturers, indicating buyers are pretty satisfied with the overall dealer and ownership experience.

The Mazda CX-5 was crash-tested by Euro NCAP in 2012, when it achieved the maximum five-star overall safety rating, along with a 94% score for adult occupant protection, 87% for child occupant protection and 64% for pedestrian protection. Its score was reviewed in 2014 and 2015 and remained at five stars each time.

Unlike some manufacturers, Mazda doesn't cut corners with safety equipment on lower-spec models. Every version of the CX-5 – from the cheapest SE-L to the most expensive Sport Nav – has front and curtain airbags, electronic stability control, hill-start assist, ISOFIX child-seat mounts, a city braking system and tyre-pressure monitoring. Driver assistance tech like lane assist and blind-spot detection systems also come as standard.

This is an impressive line-up, but the newer Nissan Qashqai offers some even more advanced safety technologies, such as lane-departure warning and a traffic-sign recognition camera, which aren’t available on the Mazda.