"The Mazda CX-5 SUV is such a good all-rounder, it’s hard to find much to criticise. Handling, running costs, style and value are all strong points"

The Mazda CX-5 is that rare thing: a family-sized SUV that’s really good to drive. Like most such cars, it’s not much good off-road (you’ll need a Discovery Sport for that) but if you’re looking for a car that takes battered UK roads in its stride, it should be on your shopping list.

Unfortunately, it’s likely to be quite a long list, because besides the CX-5 there are rivals including the Volkswagen Tiguan, Kia Sportage, Ford Kuga, Skoda Yeti, Nissan Qashqai, Hyundai Tucson and Renault Kadjar. What should help it stand out from that lot is the fact that it was facelifted early in 2017 and has some useful additional equipment.

There’s a 163bhp 2.0-litre petrol engine, but really the range is dominated by two 2.2-litre diesels, one producing 148bhp and the other 173bhp. The 148bhp diesel with two-wheel drive and a manual gearbox is our favourite thanks to its reasonably low running costs (it does 56.5mpg), decent performance (0-62mph takes 9.4 seconds) and good refinement. The fly in the ointment is its 132g/km CO2 emissions, resulting in a 28% Benefit-in-Kind (BiK) company-car tax rating. 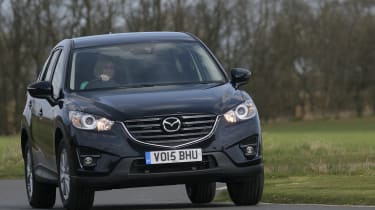 There are three trims, called SE-L Nav, SE-L Lux Nav and Sport Nav. All have a sat nav, of course, but even the ‘basic’ SE-L has 17-inch alloys, front and rear parking sensors, dual-zone climate control and a seven-inch touchscreen display. But while the specification is dazzling, the same can’t be said of the interior, which is a little dark and plain, although well built. It’s a cut above the Nissan Qashqai’s, and so it should be at the price, but it trails premium rivals such as the Audi Q3.

It’s spacious inside, with easily enough room for two adults or three children on the back seat. With the 40:20:40 split rear seats folded, the 506-litre boot expands to an impressive 1,620 litres. It’s a well shaped area, too, even if the seats don't lie completely flat.

The CX-5 comes from a brand with a reputation for building reliable cars. Indeed, it came ninth out of 32 manufacturers in our 2016 Driver Power customer satisfaction survey. Unfortunately, the CX-5 itself couldn't manage such a strong showing, posting a 49th-place finish out of 150 cars. Euro NCAP granted it a full five stars for crash safety, not least because it has autonomous emergency braking as standard.