The Mercedes B-Class should be a reliable car, and it’s definitely a safe one

Mercedes has done well in previous Driver Power customer satisfaction surveys, but 2018 saw it finish in 20th place (out of 26 brands), with a 17th-place result for reliability.

The last time the B-Class itself appeared in the survey was 2014, when it came a rather disappointing 122nd out of 150 cars. Our own impression is that the B-Class is built solidly, with trim that should last well, although we found some of the plastics lower down in the interior feel a little cheap. 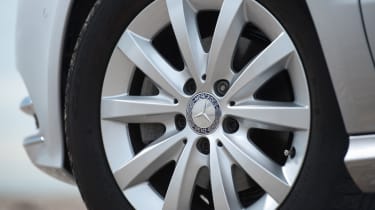 The B-Class scored the full five stars in 2011 Euro NCAP crash-tests, including 97% for adult occupant protection and 81% for child occupant protection. It’s worth noting that the test has been made tougher since 2011, so there’s no guarantee the B-Class is as safe as a five-star car tested in the past couple of years.

There's plenty of standard safety equipment on all B-Class models, though, including Collision Prevention Assist, which automatically brakes the car if it senses an imminent collision. There's also electronic stability control, traction control, anti-lock brakes, ISOFIX child-seat mounts in the rear and seven airbags – including a knee airbag for the driver.

An optional lane-keeping assistance system helps you stay between the white lines – to the extent that it'll vibrate the steering wheel if you fail to indicate when changing lanes.