“The Mercedes B-Class is a quirky model, combining the practicality of a five-seat MPV with the prestige and equipment you’d expect from the German brand”

In recent times, Mercedes has become rather prolific in spotting gaps in the market, and the Mercedes B-Class is one of the more surprising outcomes. It’s significantly taller than the Mercedes A-Class, making it a five-seat MPV in a similar style to the BMW 2 Series Active Tourer and more mainstream models like the Renault Scenic and Ford C-MAX.

With a premium badge, the B-Class is one of the most expensive, but you do largely get what you pay for, with impressive build quality and an interior boasting upmarket materials and an attractive design. While it might cost more up front, the B-Class also shouldn’t cost any extra in tax or at the pumps.

Being a Mercedes, there’s also quite a few of the manufacturer’s engines to choose from. Petrols include the 120bhp B180 and 154bhp B200, both of which feature a 1.6-litre turbo in different states of tune. Both can get from 0-62mph in nine seconds or less, which should be quick enough, and return around 50mpg.

The economy star is the B180d, with a small 1.5-litre turbocharged engine that produces 107bhp and can return up to 70.6mpg. The B200d and B220d offer incrementally more power, but also have a much larger 2.1-litre diesel, with slightly worse economy figures as a result. As the range-topper, the B220d is also available with desirable features like Mercedes’ 4MATIC four-wheel drive and a seven-speed automatic gearbox to take the strain out of driving in traffic. This gearbox is also an option across the range.

An electric version of the B-Class was also offered, with around 124 miles of driving possible from a full charge, but this has now been discontinued as Mercedes prepares for its next generation of electric models. 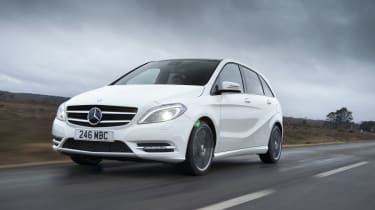 Take to the road and the B-Class is unruffled and does a good job of smoothing out imperfections. It’s not quite as involving as a Ford C-MAX or BMW 2 Series Active Tourer, but there’s a good argument that it’s the most luxurious to travel in. We recommend that you avoid the largest wheels available, because they increase running costs and make the ride less comfortable. The B-Class resists body lean in corners and can be more fun to drive than its shape would suggest, with its vague steering being the main downside. 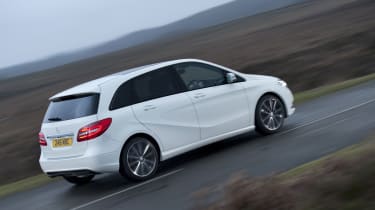 Inside, the tall roofline means there’s plenty of space for taller adults, with impressive rear legroom and headroom. Large windows around the cabin also make the space feel quite light and airy, while materials look and feel top-notch. The infotainment screen does look a little aftermarket, though. A 488-litre boot should be adequate for most and is a usefully square shape, which can be made larger by sliding the rear seats forwards and backwards.

Trim levels are fairly simple (SE, Exclusive Edition and AMG Line), but being a Mercedes, there’s also a myriad of optional extras available. Saying that, even the SE model is fairly well equipped, with 16-inch alloy wheels, cruise control, air-conditioning, a reversing camera and seven-inch display with Apple CarPlay compatibility. Exclusive Edition brings different driving modes to choose from, automatic wipers, a 4.5-inch display in the instrument cluster and an infotainment screen and wheels an inch larger than the SE model’s. Choose AMG Line and the B-Class looks a lot sportier, with different bumpers, wheels and lowered suspension. The theme continues inside, with carbon-fibre-effect trim and Artico leather seats.

Our pick would be the B200d in Exclusive Edition trim for a great blend of performance, affordable running costs, equipment and style. Mercedes ranked 21st out of 27 brands overall in our 2017 Driver Power customer satisfaction survey and the B-Class received a five-star safety rating after independent Euro NCAP crash-testing in 2011.