The optional automatic gearbox in the Mercedes B-Class is excellent, and the diesels are smooth

Under the bonnet of the Mercedes B-Class there's now a choice of two petrols and four diesels.

The B-Class comes with a six-speed manual gearbox as standard, but you get the option of a seven-speed automatic that offers a smoother, easier driving experience. It can be a bit slow to respond at times, though.

The sole four-wheel-drive model is powered by the B220d diesel engine and offers useful extra grip. For most drivers, we wouldn’t recommend it, because it’s unlikely to offer much of an advantage, but it could be useful if you live in a remote or rural area. Overall, the B-Class is perfectly comfortable and acceptable to drive, but it's not as responsive as the BMW 2 Series Active Tourer. 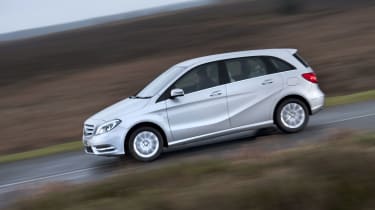 Two choices of 1.6-litre petrol engine are available in the B-Class. The B180 is a 120bhp engine that's smooth but not that quick off the mark, while the 154bhp B200 is noticeably more powerful than all but the top-of-the-range diesel, if a lot less fuel-efficient.

The diesels are your best bet – we recommend the B200d. it’s barely any less economical than the 180d, but its extra power makes the B-Class easier and more relaxing to drive.

The top-end B220d is fast and smooth to drive, but it's on the costly side. It's also a bit reluctant to get moving at low speed. This engine is also offered in four-wheel-drive B220d 4MATIC form.