A wide stance and low driving position mean you immediately feel more connected to the car in the Mercedes E-Class Coupe than you do in the saloon version.

The SE model feels softer than the Sport on the road, giving you the choice of a comfortable cruiser or a more engaging driver's car. The over-riding impression is of smoothness, with the automatic gearbox working swiftly and slickly, but it's not as much fun to drive as a BMW 4 Series.

Avoid the entry-level E200 petrol version if you want effortless performance, as the E250 diesel makes a lot more sense in this regard and doesn’t cost a whole lot more. Further up the range, the engine differences are less notable – the petrols tend to be more responsive and the diesels more flexible, yet no less rapid. 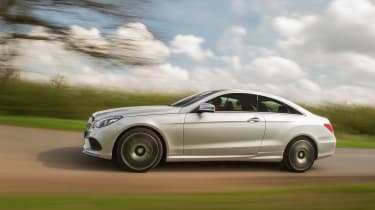 For pure economy you can’t beat the E220 BlueTEC, although at 8.3 seconds for the 0-62mph sprint, it’s the slowest model in the range.

The E350 CDI is the pick of the diesels for speed – it's smooth and quiet, but feels really quick. Acceleration from 0-62mph takes 6.1 seconds, but it's the useable power at all speeds that's most impressive.

We’re big fans of the relaxed seven-speed automatic gearbox, as it suits the car well and most of the time the gearchanges are smooth and fast.