The Mercedes E-Class Coupe is expensive to buy – typically more so than its BMW 4 Series rival – but it feels like a bigger car and running costs should be relatively acceptable.

Choose a diesel if you want to recoup the most money when you come to sell the car. After three years, they’re expected to fetch around 50% of their original value – even more if you choose the E350. The petrols fare slightly worse, holding on to around 47% of their purchase price in the same period.

The cheapest E-Class Coupe is also the most frugal – the E220 BlueTEC diesel in SE trim returns 60.1mpg and has CO2 emissions of 122g/km, which means annual road tax will cost £110. Upgrade to the AMG Line trim for £2,500 and you’ll be looking at slightly higher running costs. 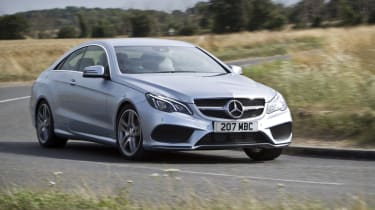 If you require a more powerful diesel, the E250 CDI is less efficient, but not ruinously so. This engine has CO2 emissions of 129g/km and fuel economy of 57.7mpg. More powerful still is the E350 BlueTEC, which has been given Mercedes' new 9G-Tronic automatic gearbox to help lower its CO2 emissions to 136g/km and increase fuel economy to 54.3mpg. Road tax for these two engines is £110 and £130 respectively.

The entry-level E200 and E220 engines fall into insurance groups 40 to 41, with the higher-powered engines creeping up into groups 44 to 47.

The E-Class comes with a warranty that covers you for unlimited miles during the first three years of ownership – exactly the same as what’s offered by BMW on the 5 Series.

Mercedes offers fixed-price service plans across its range, starting from £24 a month – that’s for two services over two years.