Mercedes has a respected image and a reputation for quality, yet it hasn’t always fared brilliantly in customer surveys. Our annual Driver Power owner satisfaction survey is no exception and the company has had mixed results over the years. Safety, though, is less of a concern – Mercedes was the original innovator of many of the safety systems we take for granted in cars today.

Mercedes has a chequered history when it comes to our annual Driver Power owner satisfaction survey, and in 2017 it dropped to 21st out of 27 manufacturers, behind BMW (ninth place), Volvo (seventh) and Lexus, who came out top. Slightly better news was a 16th-place in the reliability category, despite 15.2% of owners reporting a fault in the first year of ownership. Unfortunately, we didn’t receive enough responses from owners of the GLE Coupe or GLE SUV for their cars to specifically feature in the survey. 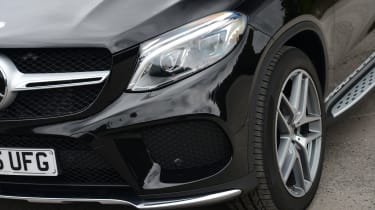 The GLE Coupe’s safety isn’t really in doubt. It comes with loads of kit designed to make driving as safe as possible, including full LED headlights with adaptive high-beam assistance, permanent four-wheel drive, crosswind assistance and ‘Collision Prevention Assist Plus’, which will alert you and even brake automatically if you don’t react to avoid a potential crash, as with any other autonomous emergency braking system.

The GLE Coupe hasn’t yet been subjected to independent crash-testing by Euro NCAP, but when the GLE’s ML predecessor was tested in 2012 it was awarded a full five-star rating. As well as all the airbags and electronic safety systems that are mandatory these days, pedestrians are afforded impact protection thanks to a bonnet which lifts several inches to help absorb impacts.