The Mercedes GLE was launched in 2015, replacing the Mercedes ML because of a new naming convention where every Mercedes SUV badge now starts with a G. Its arrival also ushered in the Mercedes GLE Coupe, a dramatic coupe version of the SUV designed to go head-to-head with the BMW X6, Porsche Cayenne and Range Rover Sport.

It also needs to attract buyers from more conventional models like the BMW X5, Volvo XC90 and Volkswagen Touareg. For many, its first hurdle will be cost, because the GLE Coupe costs significantly more than the regular GLE and is pricier than most rivals. 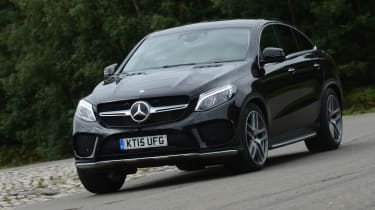 Part of the reason for this is the fact the GLE Coupe range is pitched somewhat higher, with no entry-level SE trim and the only diesel engine being a six-cylinder 3.0-litre, badged GLE 350d, with 4MATIC four-wheel drive. It produces 255bhp and gets the car from 0-62mph in seven seconds, returning fuel economy of 39.2mpg.

Clearly targeted at performance-hungry customers, the GLE Coupe can also come with a turbocharged 3.0-litre petrol in the AMG GLE 43 or even a 5.5-litre V8 in the 577bhp AMG GLE 63, taking just 4.2 seconds to get from 0-62mph – faster than a Porsche Cayenne Turbo.

On the downside, the AMG GLE 63 can only return up to 23.7mpg, so the smaller petrol engine could be the one to go for, with economy of 30mpg. It doesn’t cost much more than the diesel, yet getting from 0-62mph in 5.7 seconds, it’s significantly faster.

The interior is closely based on the GLE, with the same clear layout and excellent COMAND infotainment system. The materials on display are attractive and everything feels sturdily constructed. A lower roof and reduction in headroom means the GLE Coupe feels more car-like than the standard GLE, but handily the boot is almost the same size in both models and bigger than the BMW X6.

The GLE 350d diesel is available in the well-equipped AMG Line trim or more expensive Designo version, which adds a 360-degree parking camera, a panoramic sunroof, a Harman Kardon stereo, massaging front seats, upgraded upholstery and many other luxurious features. AMG is the performance division of Mercedes but the AMG name is used broadly across the Mercedes range, including for the sporty AMG Line trim which, in the case of the GLE, brings a bodykit, enlarged alloy wheels and suspension settings tailored to give a more responsive drive.

However, things are made complicated by the similar names of the AMG GLE 43 and AMG GLE 63 petrol versions. While the rip-snorting GLE 63 V8 stands as the performance flagship of the range, with its hand-built AMG engine, model-specific suspension and numerous engineering upgrades to support all that extra power, the GLE 43 is more like an AMG Line car than an AMG model in its own right – its 3.0-litre engine is also available in a lower power output in other Mercedes cars. 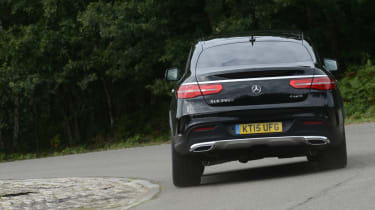 Mercedes finished in 21st place out of the 27 brands surveyed in our most recent annual Driver Power owner satisfaction survey, a disappointing result for a marque of such prestigious standing, though the GLE itself wasn’t given a specific score. While we can’t comment specifically on the car’s reliability, we can at least say that the GLE Coupe is likely to be very safe: its ML predecessor was awarded the full five stars in crash tests by independent safety experts Euro NCAP.

The GLE Coupe is an expensive car and not likely to delight with low running costs. It certainly has driveway appeal, though, and it’s likely to win sales on its image and performance alone.