"The Mercedes-AMG GLE 63 Coupe is an expensive, rather niche choice for SUV buyers, but it's astonishingly quick, luxurious and comfortable" 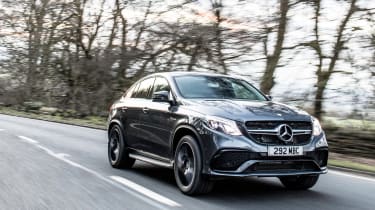 Like most manufacturers, Mercedes has a range of SUVs that attempts to offer buyers exactly the right size car for their needs; its GLE Coupe is one of the larger ones and goes up against rivals such as the Audi Q7, BMW X5, Porsche Cayenne and Range Rover Sport, while offering some extra style in the form of a sloping, coupe-inspired roofline.

Like the standard Mercedes GLE, the Coupe is also available as a performance model, and this is it: the Mercedes-AMG GLE 63 Coupe. Equivalent models include the sporty Audi SQ7, BMW X6M, Porsche Cayenne Turbo and Range Rover Sport SVR. 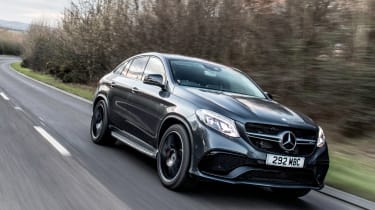 The Mercedes-AMG GLE 63 Coupe is one of the few remaining Mercedes to use a twin-turbo 5.5-litre V8 petrol engine, which has been engineered to produce 577bhp. The power on offer makes the GLE 63 Coupe devastatingly quick in a straight line, particularly for such a large car. Along with a luxurious, comfortable interior, it makes this SUV an accomplished cruiser, even if its size and weight prevent it from ever feeling like a true performance car.

The GLE 63 Coupe is phenomenally expensive to run, but its road presence, brutal speed and luxurious interior will be very tempting to the few who can afford to consider buying one.

A slightly old-fashioned 5.5-litre V8 is not the most economical choice 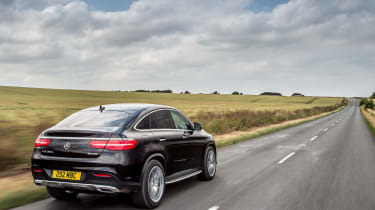 The GLE 63 has a twin-turbo 5.5-litre V8 petrol engine, which is something of an anachronism in an age when performance engines are generally being downsized to provide the same power but improved fuel economy. The engine’s size combined with the car’s weight leads to claimed fuel economy of 23.7mpg (which will drop significantly when the car is in traffic or driven hard) and CO2 emissions of 278g/km.

The car costs £140 a year to tax, plus a surcharge of £310 in years two to six of ownership, because it costs more than £40,000. Servicing and consumables, such as tyres and brake pads, will cost more than average, and the GLE 63 is rated in group 50, so insurance premiums will be expensive. Like all new Mercedes, the GLE 63 comes with a three-year/unlimited-mileage warranty. 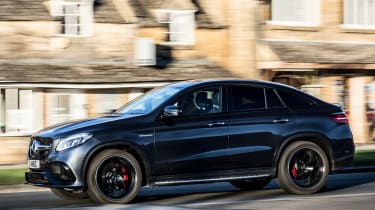 With 577bhp from its 5.5-litre V8, the GLE 63 is a seriously fast luxury SUV, managing 0-62mph in just 4.2 seconds. Mercedes stiffened the suspension of the standard GLE when transforming it into the 63 model, making it the most agile in the range as a result.

Mercedes’ 4MATIC four-wheel-drive system provides plenty of grip for sending the car’s abundant power securely to the road, and also generates lots of traction in corners. The car comes with a five-mode drive select system and Airmatic adaptive suspension so you can alter its character depending on how you want to drive.

In Comfort mode, the GLE 63 Coupe makes a luxurious motorway cruiser. There’s so much power on offer that the engine feels like it’s barely idling at 70mph and there’s a huge amount of pulling power in reserve when you need to accelerate or overtake.

The Sport and Sport+ modes increase sharpness, making the suspension firmer and improving steering and throttle response. While the car is certainly an impressive feat of engineering, it still can’t hide how big and heavy it is in on a really twisty road; it feels cumbersome and slow to react by performance-car standards, and the steering doesn’t communicate much about what’s happening between the tyres and the road.

The inside of the GLE 63 Coupe is undoubtedly a plush, comfortable, well built place in which to travel; its only main drawback is that it’s starting to show its age compared to the interiors of newer cars. 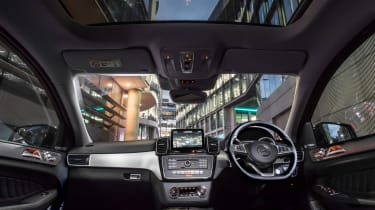 Mercedes’ infotainment system isn’t quite as well integrated as those made by Audi and BMW, with the screen looking rather like an afterthought thanks to the way it sits on the top of the centre console. It functions well enough, but we expect Mercedes to come up with a more resolved solution in the near future.

In Comfort mode, the GLE 63 is a very comfortable car and an excellent companion for long journeys. The two sportier modes of the drive select system take some of the compliance out of the suspension setup, and in combination with the car’s large alloy wheels, can make the ride quite harsh.

If you want maximum practicality from your performance SUV, you may want to look at the standard GLE 63 rather than this Coupe. Its sloping roofline eats into the space available inside. However, if you’re in love with the looks, the GLE 63 Coupe is more usable than the closest alternative, the BMW X6.

The raked roof of the GLE Coupe means there’s less headroom for rear passengers than in the standard GLE, but adults will still be comfortable on the back seats. The roofline does also result in smaller rear windows and poorer rear visibility for the driver.

Boot space is pretty vast at 650 litres, trumping the 580 litres in the X6, and although there’s a fairly chunky load lip, you do at least get a powered tailgate to help make loading as smooth a process as possible. 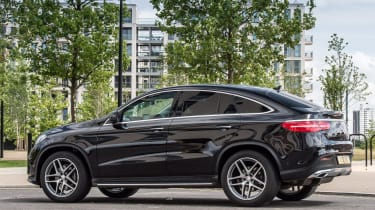 The Mercedes GLE Coupe wasn’t included in our Driver Power 2017 survey, but Mercedes as a brand finished 21st out of 27 brands overall. As an upmarket brand, it’s a disappointing result, but owners did rate their cars for reliability and their engines. The GLE 63 Coupe’s tried-and-tested 5.5-litre V8 engine has been used in numerous AMG models over the years and should prove reliable as result.

Euro NCAP never crash-tested the GLE 63 Coupe, but the car is based heavily on the M-Class before it, which was awarded a five-star safety rating in 2012. The test has changed significantly since then, but the GLE Coupe has more of the latest safety systems, too. 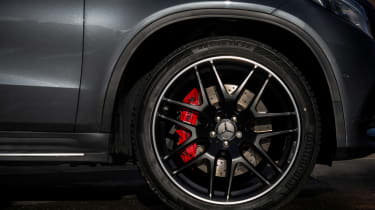 With a list price of around £100,000, the Mercedes-AMG GLE 63 Coupe isn’t a cheap car by any stretch of the imagination, but it’s priced closely to similar to comparable models from Porsche and Land Rover. The Porsche Cayenne Turbo and Range Rover Sport SVR feel less dated than the GLE, as well as being more accomplished performance cars. Despite its age, though, the GLE is still a competent, luxurious and quick SUV.

The GLE 63 comes well specified as standard, but options including a rear-seat entertainment system, which comprises two eight-inch screens with remote controls and headphones. There are nine paint choices and three alloy-wheel designs; one set is 21 inches, the others are 22 inches in diameter.