“The Mercedes GLE is a full-size SUV that’s&nbsp;well equipped and pretty stylish, but it’s&nbsp;getting on in years and due for replacement”

The Mercedes GLE was one of several new 4x4 cars to join the brand's range in 2015. It competes with the BMW X5 and Audi Q7, as well as cars like the Range Rover Sport, Volkswagen Touareg, Porsche Cayenne and Volvo XC90. 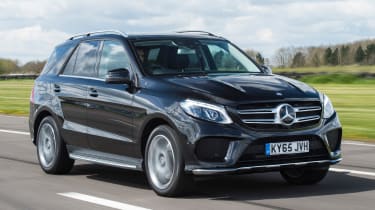 In fairness, the GLE is certainly more stylish than the boxy Mercedes M-Class it replaced, and that visual appeal is certainly improved by the AMG Night Edition with its AMG bodykit and larger alloy wheels.

The interior is definitely capable of holding five passengers with ease and the boot can swallow a considerable amount of luggage. It's not a class leader for space, but it doesn't fall noticeably short on the competition. In fact, it does better than the BMW X5 and Porsche Cayenne for boot space, considering they're some of the few GLE rivals that offer five seats as standard – although the X5 can be specified with seven seats, unlike the GLE.

The Merc’s suspension is a little firm, but ride quality can be improved by specifying the optional air-suspension system. The ride can also be altered by the Dynamic Ride system, but Sport mode only makes it more uncomfortable. Like most of its rivals, the GLE is much better suited to a relaxed cruise than it is to driving on the limit.

There's no longer a wide choice of engines with the GLE currently being offered only in 350d 4MATIC form. The 350d has a smooth and quiet six-cylinder engine that takes the GLE from 0-62mph in 7.1 seconds, with fuel economy and emissions of 36.7mpg and 204g/km of CO2. It’ll be expensive as a company car, falling into the highest Benefit-in-Kind (BiK) bracket of 37%. 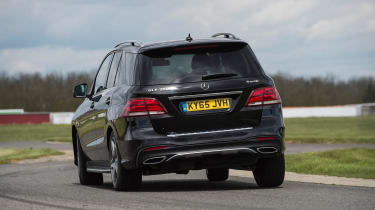 The GLE-class certainly feels like a solidly built car and, while Mercedes’ 20th-place finish (out of 26 manufacturers) in our 2018 Driver Power customer satisfaction survey is unremarkable, the brand performed similarly to its key rivals, BMW and Audi. The GLE should also be a very safe car; while it hasn’t gone through its own safety tests, its sheer size adds reassurance, as does the five-star rating from Euro NCAP gained by the outgoing Mercedes M-Class, which is mechanically identical to the GLE.