"Large, fast and expensive, the Mercedes-AMG GLE 63 is a bold SUV that prioritises performance over economy, with lashings of luxury added for good measure" 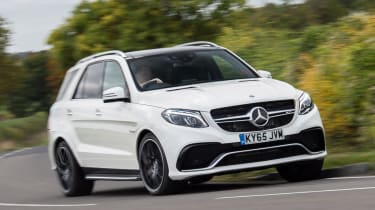 Mercedes has a large and varied range of SUVs that covers every possible gap in the market; its GLE is a large model that goes up against rivals such as the Audi Q7, BMW X5, Porsche Cayenne and Range Rover Sport. This segment of the SUV market has become populated with performance versions, too, and the GLE 63 is Mercedes’ effort, now only available in S trim with no less than 577bhp. It squares up against the similarly sporty Audi SQ7, BMW X5M, Porsche Cayenne Turbo and Range Rover Sport SVR.

The Mercedes-AMG GLE 63 S is one of the last Mercedes models to use AMG’s twin-turbocharged 5.5-litre V8 petrol engine, here producing a healthy 577bhp. If you want a less powerful AMG-tuned GLE, the retirement of the non-S model GLE 63 leaves the 385bhp 3.0-litre V6-powered GLE 43 AMG as your only alternative.

Choosing the GLE 63 S means buying a car that’s at odds with most others on sale in the UK – it’s large, brutally fast and uses more than its fair share of super unleaded. The GLE is, however, beautifully comfortable and relaxed when not deploying all of its formidable performance.

The GLE 63 S is a large, heavy car powered by a highly tuned, large-capacity V8 engine. As such, economy is not its strong point – an average figure of 23.9mpg is quoted by Mercedes, or just 18mpg around town – a common stomping ground for cars like this.

Insurance is likely to be expensive, too: the Mercedes-AMG GLE 63 S Night Edition (the only model currently available) sits in insurance group 50 – the highest possible.

As with other Mercedes-Benz cars, the GLE 63 S is covered by a three-year/unlimited-mileage warranty. Mercedes offers a choice of servicing options, with various payment options to suit various styles of use and mileages.

Fearsome performance despite considerable weight, but feels cumbersome in corners

The Mercedes-AMG GLE 63 AMG is powered by a twin-turbocharged, 5.5-litre V8 engine that produces 577bhp. It feeds that power to the road via Mercedes’ 4MATIC four-wheel-drive system, which in this case has been set up to allow 60% of the power to go to the rear wheels for a sportier driving experience. There are five selectable driving modes and huge sports tyres, both of which help maximise grip in all conditions. The car is only available with a seven-speed automatic gearbox. 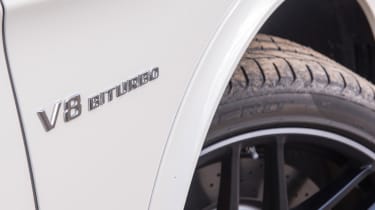 On the move, the GLE 63 is remarkably hushed and luxurious, offering near-Bentley levels of refinement. However, despite all of that power and Mercedes’ efforts to keep its heft under control, the GLE 63 is no sports car – its great on fast, smooth roads, but tighter B-roads make the large SUV feel a bit cumbersome. Steering is light and grip reserves are huge, but there’s no real sense of sporty driver engagement.

If going fast is your cup of tea, though, the GLE 63 remains one of the quickest large SUVs on sale. Accelerating from 0-62mph takes just 4.2 seconds, a remarkable figure for a car that weighs around 2.3 tonnes, barreling on to a (limited) top speed of 175mph. Performance is effortless and a maintaining a high-speed cruise is easy thanks to the car’s great stability.

Comfort and luxury, but design looks dated next to modern rivals

Inside, the GLE 63 is much the same as the standard GLE, albeit with extra sporty touches like massaging, climate-controlled ‘multi-contour’ front seats, a sports leather steering wheel and brushed metal trim (or, for around £1,500, carbon-fibre trim).

Standard equipment in addition to other GLE models also includes a 4.4-inch display in the AMG-specific dials behind the steering wheel, more leather-trimmed areas (in the same AMG-specific Napa leather as the seats), heated rear seats and ‘THERMOTRONIC’ three-zone climate control. The GLE 63 also gets a 14-speaker, 830-watt Harmon Kardon stereo. 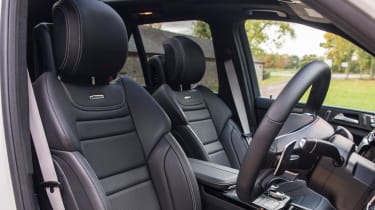 The Mercedes’ infotainment isn’t quite on the same level as those offered by BMW and Audi; its screen is rather clumsily placed at the top of the centre console and the rotary dial used for drive mode selection is awkwardly located, too. Interior styling is slightly dated compared to the GLE’s more modern rivals, but overall build quality is good.

Despite its sporty intentions, the Mercedes-AMG GLE 63 S is comfortable and quiet on the move, with great sound insulation and supple suspension. Provided you can afford to keep its 93-litre fuel tank topped up with super unleaded, the GLE 63 makes a fantastic long-distance cruiser.

Practicality is largely unchanged from the standard GLE SUV

Practicality is likely to be a secondary consideration for most GLE 63 buyers, but as it’s based on a large family SUV, the AMG still offers plenty of space for passengers and their luggage. Rear legroom isn’t as good as some rivals, but there’s still more than enough space for four or even five to sit in comfort.

The boot measures 690 litres, with seats-down load space coming in at just over 2,000 litres, with a usefully flat load bay. The GLE 63’s cabin is filled with clever practical touches, including standard heated and cooled cup-holders and a large glovebox.

Even with its performance-orientated engine, the GLE 63 sticks to its SUV roots by offering towing capacity for 3,050kg braked or 750kg unbraked trailers.

The Mercedes GLE didn’t feature in our Driver Power 2017 survey, in AMG form or otherwise, but Mercedes finished 21st out of 27 brands overall. That's not terribly impressive, but owners rated their cars well (16th) for reliability and in the engine category. We’d take comfort in the GLE 63’s older 5.5-litre V8 engine, which has been used in a number of AMG models and as such should prove reliable if properly serviced.

The Mercedes GLE hasn’t been crash-tested by Euro NCAP, but the car’s broadly similar M-Class predecessor was awarded the maximum five-star safety rating in 2012. It’s hard to gauge how safe the new car is by modern standards, however.

The GLE 63 is expensive to specify, buy and run

With a list price of around £100,000, the Mercedes-AMG GLE 63 is very expensive, but more or less par for the course for a vehicle of this type, with rivals from Porsche and Land Rover coming in at around the same mark. Both the Porsche Cayenne Turbo and Range Rover Sport SVR offer very similar performance from their respective petrol V8 engines, but both are far more modern inside and out, as well as being better to drive overall. They offer buyers more choice, too: the Mercedes-AMG GLE 63 S Night Edition is currently the only version offered as the model approaches the end of its production life. Despite its age, though, the GLE is still a capable and very fast performance SUV.

The GLE 63 S Night Edition comes well specified as standard, but you can add a Rear Seat Entertainment System (£1,600) for further luxury, which brings two eight-inch screens with remote controls and headphones. If you want to make use of the GLE 63’s impressive towing capabilities, you’ll need the 13-pin towbar set-up – roughly £1,000. Mercedes recommends discussing any ‘specific electrical towing requirements’ with a your dealer at ordering time.