The MINI Countryman is the most practical MINI by far, but lags behind some rivals

The MINI Countryman’s dimensions are designed to appeal to families that want a normal MINI, but can’t live with the hatchback’s tight interior and small boot. With a length of 4.1 metres (0.3 metres longer than the hatchback) it’s not quite as big as the Nissan Qashqai, yet offers roughly the same boot space.

The MINI Countryman can be ordered with either four or five seats. Go for the former and the two rear seats can slide forwards and backwards to give more passenger space or a larger boot – but the latter option is a more popular and arguably more practical choice. 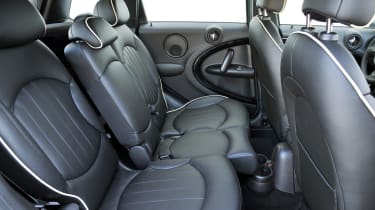 Like all SUVs, the Countryman offers plenty of headroom for all occupants, and legroom’s good too – although it’s only truly spacious in the back when you’re able to sacrifice that extra boot space. It’s easy to get in and out of the back, even for adults.

The Countryman has its fair share of storage cubbyholes in the form of a smartphone holder, a place to leave your sunglasses and cup-holders dotted around the cabin. But it feels like it could do with more storage here and there – the doors in particular have fairly mean-sized pockets. And the hard plastics on the glovebox (and the rest of the dash) aren’t particularly appealing.

The MINI Countryman’s 350-litre boot is much bigger than the 211 litres offered in the MINI hatchback. Dropping the rear seats reveals 1,170 litres of space. This is a decent size, but if you can’t live without a roomier boot, consider the Skoda Yeti, which offers a spacious 416 litres. 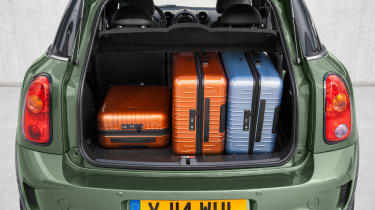 The rear seats don’t completely fold flat – there’s a bit of a slope, but nothing major. This is offset by a panel that folds down to flatten the load bay as much as possible.