The MINI Countryman is more generously equipped than some of its fellow MINIs, and there’s the usual customisation options offered by the brand – lots of paint shades, metallic finishes, graphics, leather trim and so on. But these extras tend to be quite expensive.

There’s plenty of adjustment in the driver’s seat and the steering wheel to ensure the driver can get as comfortable as possible. The Countryman is a reasonably comfortable car overall, although we have some reservations about the firmness of the seats and suspension. Short journeys won’t be a problem, however. 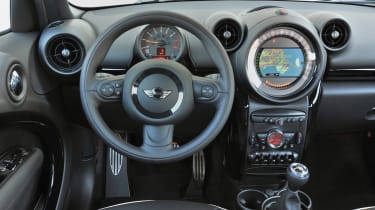 The dashboard can be a bit confusing at first due to MINI’s retro interior styling, which looks great but isn’t as logical as the layout of cars such as the Volkswagen Golf. Most of the controls are easier to use and generally more appealing than in previous MINIs. For example, the previously floor-mounted electric window switches have been moved to a more accessible position and there are some nice new chrome touches. 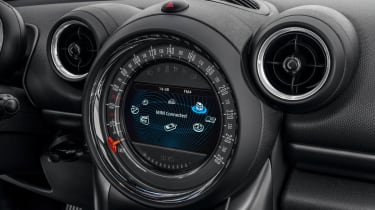 The Countryman has extra sound deadening and redesigned wing mirrors that aim to make the cabin quieter at speed. These changes have made a difference, but it’s still a bit too noisy for our liking. Even the basic MINI Countryman One has a DAB digital radio, Bluetooth phone connectivity, heated door mirrors, roof rails, rear parking sensors and air-conditioning, but as this car is highly customisable, it’s easy to run up a big bill by picking too many options. The ALL4 Business model has sat nav, parking sensors, automatic headlgihts and windscreen wipers.

The basic MINI One has ugly steel wheels, but replacing them with alloys will cost you £500 at best or more than £2,000 for big 18-inch rims. Getting extra equipment in a bundled pack can save you money compared to adding each item individually. The Chili pack – which includes climate control, bright xenon headlights and sports seats – looks particularly enticing. Unlike many optional extras, it should help resale value after a few years’ ownership, too.