"The MINI Countryman isn't the most practical crossover in the world, but it's fun to drive and quite cheap to run."

The MINI Countryman is aimed at buyers who like the style and image of the MINI hatchback but need a more practical car with more space inside. The Countryman’s SUV-like proportions mean it also has some of the crossover appeal that is proving so popular, and although its shape is arguably a compromised version of the modern MINI hatchback, it’s one many are likely to accept in order to buy into the brand in a manner that better suits their lifestyles.

The Countryman finds itself up against a wide range of competition; which of its rivals you may want to consider will depend on what exactly you like most about the car. The Nissan Qashqai and Skoda Yeti have the same crossover credentials, with a raised driving position, spacious interiors and great visibility, whereas the Audi A3 Sportback delivers similar space but also the upmarket, stylish interior and badge appeal. 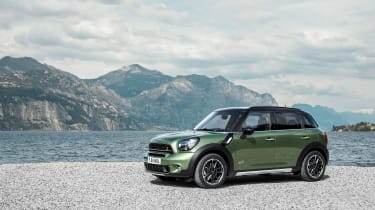 MINI was one of the first brands to push the idea of car personalisation, offering a vast array of colours, graphics, alloy wheel designs, styling packs and accessories to enable customers to set their cars apart from other MINIs on the road. The Countryman is no different, with plenty of extas to choose from. There are several bundles available too; they contain combinations of some of the most popular options at a reduced price.

MINIs have rightfully garnered a reputation for being good fun to drive and despite the Countryman’s slightly unwieldy, tall shape compared to the MINI hatchback, it still proves enjoyable on a twisty road. This does come at the expense of some comfort, as the suspension is very firm to stop the car leaning in corners. The Countryman is available with MINI’s ALL4 four-wheel drive system, which gives you even more grip in corners and when roads are slippery.

The option of four-wheel drive and the SUV-inspired look of the Countryman may allude to off-road adventure but it’s a car best kept away from challenging terrain. The engine range is reasonably economical as a whole and performance is good, with the sporty, top-of-the-range John Cooper Works capable of 0-62mph in seven seconds. The most basic diesel Countryman model, the One D, was withdrawn from sale in 2015 because so many people were opting for the higher-spec Cooper D, so that the latter is now the most economical Countryman. 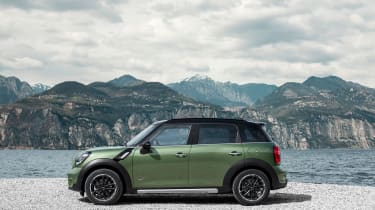 If a new car isn’t a pressing issue, you may decide to wait until 2016 when a new Countryman is set for launch. The current model is actually based on the previous MINI underpinnings, while the new one will use the ‘UKL1’ platform, which already forms the basis of the standard MINI hatchback and Clubman, as well as the BMW 2 Series Active Tourer.