The Toyota Prius is impressively quiet around town, but the suspension is firm

Not many cars are quieter than the Toyota Prius around town. In fact, driving in silent electric-only mode is frankly quite eerie, making you feel like you’re sneaking up on other drivers, cyclists and pedestrians. However, put your foot down hard and the CVT automatic gearbox tends to hold onto revs for too long, which causes the engine to make quite a racket.

The Toyota Prius dashboard isn’t the last word in tactility, with plenty of grey plastics in evidence. There is at least some graining pattern to lift the ambience.

Better is the stubby blue gearstick, which provides a splash of colour. It takes a little getting used to, because there’s an additional regenerative function that applies the brakes slightly to reduce the time taken to recharge the battery. 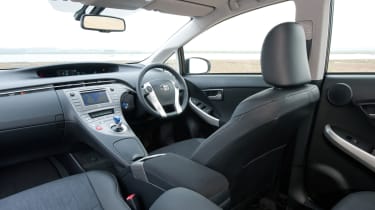 There’s a large array of instruments in the centre of the top of the dash, but its green-blue graphics look very dated. The screen in the centre console is better – depending on which model you go for, it’s one of Toyota’s Touch & Go infotainment and connectivity systems.

The buttons are big enough to press without taking your eyes off the road, and are logically laid out across the centre console and on the steering wheel.

The Prius is expensive to buy thanks to all the technology and accessories it carries, with the entry-level T3 model coming with automatic air-conditioning, alloy wheels and electric windows as standard.

Top-spec T Spirit cars also come with sat nav, a reversing camera and a Toyota Touch stereo system with Bluetooth and USB connectivity. There’s even an optional solar-panelled sunroof that cools the car while it's parked. 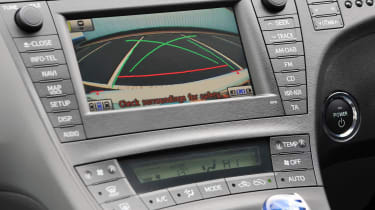 However, if you go for this option, you must revert to the 15-inch alloy wheels that come as standard on the lower-spec cars. Toyota doesn’t offer a clear explanation for this, although it seems like a small sacrifice for stepping into a cooled car on a hot sunny day.

There’s a relatively short list of options available for both versions of the Prius. The Toyota Touch & Go Plus system provides sat nav, Bluetooth and three years of map updates for £950. Leather seats are costly at £1,500, as is the solar roof, but it’s a worthwhile option nonetheless.

T Spirit models can be fitted with a £1,750 Technology Pack, which supplies adaptive cruise control, automatic parking, a DAB digital radio and a system that can automatically apply the brakes if it detects an imminent collision.