The Toyota Prius is far from the most entertaining car to drive – hybrids rarely are. There’s little body lean when cornering, but the Prius lacks real sensitivity through its steering.

It’s certainly more fun to drive than a Honda Insight, but the Lexus CT feels slightly sportier. The Prius’ suspension is also rather firm as the batteries for the electric motors weigh quite a lot. This means the Prius can feel a bit bumpy when driven over rough, potholed roads.

The Prius’ 1.8-litre Hybrid Synergy Drive pairs a 98bhp petrol engine with a 36bhp electric motor to deliver a combined output of 134bhp. What that actually means on the road is that it’s faster out of the blocks than equivalent conventionally powered cars, accelerating from 0-62mph in 10.2 seconds. 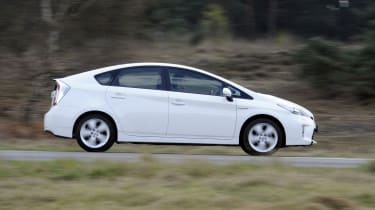 You can drive the Prius using only the electric motor silently for a couple of miles, but any genuine pressure on the accelerator will start the combustion engine. Hard acceleration is loud due to the CVT gearbox fitted – this transmission effectively has one gear, so the engine note can drone.

The Prius’ dashboard has a status screen that shows whether the car is running on electricity alone, petrol alone, or a combination of both power sources. It also shows how much charge is being delivered back to the batteries when you’re slowing down or braking. Paying attention to this screen is the secret to achieving decent fuel economy in day-to-day driving.

The Toyota Prius Plug-In Hybrid gets around this for the first 15-or-so miles by travelling on electricity alone. A 90-minute charge will give you enough power to do this, but the maximum range is significantly affected by the prevailing weather conditions – the lower the temperature, the shorter the range.

Once the Plug-In has depleted its battery, it seamlessly switches to the petrol engine and drives in exactly the same manner as the standard car.