"The Vauxhall Mokka is usefully practical and comes with lots of equipment as standard, although the overall package isn’t enough to make it a class leader."

The Vauxhall Mokka was a late entrant to the compact crossover segment of the market but that hasn’t prevented it from selling in good numbers. It was launched in 2012 but is still going strong years later, managing to be the only car in its class to make the UK Top 10 bestsellers list in 2015.

The engine range was a downside when the car was first launched but several updates since then have seen an improvement in this regard. The rattly, loud 1.7-litre diesel was replaced by a smaller 1.6-litre engine that’s smoother and marginally more efficient, while a turbocharged 1.4 petrol engine is a decent alternative to the diesel options.

The Mokka claims 60mpg in fuel economy for the 136bhp 1.6-litre diesel, and while this isn’t bad, it’s a way off the best figures for a car in its class. A petrol-powered Citroen C4 Cactus claims roughly the same economy, and petrol engines are usually significantly behind diesels in this regard. 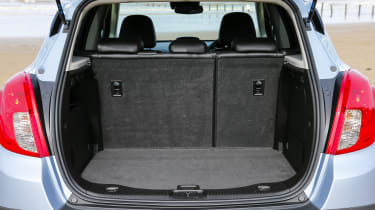 Because the Mokka’s engines lag behind the best in efficiency terms, it’s worth avoiding the optional four-wheel-drive system and automatic gearbox because they increase running costs even further; we’d recommend the standard front-wheel-drive, manual gearbox setup. The top trim levels push up the price of the Mokka and in truth, the entry-level Exclusiv and company-car-orientated Tech Line come with more than enough equipment for most buyers.

The Mokka’s solid if unremarkable credentials continue with its 356-litre boot, which is big but still beaten by cars launched more recently like the Renault Captur.

Similarly, used values are superior to those of many other Vauxhall models but still some distance from the best in class. Most buyers tend not to be too concerned with the Mokka’s outright pace and how well it handles in corners, which is just as well, as it’s not the most fun to drive.

So the Mokka is good without excelling in any one area. Perhaps the biggest downside is its price: a starting figure of £16,684 for the most basic and least efficient model makes it one of the most expensive compact crossovers in this class and quite close price-wise to larger SUVs like the Kia Sportage and Nissan Qashqai. It is however worth remembering that Vauxhall are renowned for offering discounts on their cars and that may be one big reason for the Mokka’s lasting popularity. It’s definitely worth negotiating with your dealer if you think the Mokka could be for you.

The generous equipment mentioned earlier does go some way to justifying the high list price (the Tech Line in particular comes with lots of class-above equipment for for only a little more money than the entry-level Exclusiv), but that might not be enough for some buyers if a discount isn't forthcoming too.

High prices and above-average running costs aside, the Vauxhall Mokka does offer a rounded package that covers most of the bases fairly well, albeit not always in truly class-leading fashion.