Rivals may look more inviting, but few can match the Volkswagen Tiguan’s practicality

Once more the Volkswagen Tiguan shows its class – this time in its carefully considered functionality. The boot is large and square-shaped for maximum flexibility. The second row of seats slides to create greater load space or more legroom as required.

There are plenty of storage spaces and the most powerful versions can tow up to 2,200kg. Rivals may look more inviting, but few can match the Tiguan’s all-round practicality.

The Tiguan is really a four-seater only – it can just about seat five adults on an occasional basis. There’s generous headroom and legroom throughout, and the rear seats not only slide but recline, too. There are numerous storage spaces and cubbyholes including in the centre console and on the top of the dashboard. The door bins can’t quite accept a bottle of water, however. 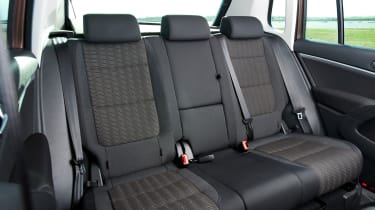 Models other than the most basic S have a front centre armrest with a storage compartment and a pair of rear cup-holders. An optional storage pack increases the available space. However, if smart storage ideas are top of your list, rival SUV the Nissan Qashqai has the edge.

With the rear seats up, the Tiguan’s boot has a capacity of 615 litres. This is larger than the Nissan Qashqai and Skoda Yeti, as well as the Mazda CX-5 and Nissan X-Trail. However, this measure is with the rear seats pushed forward, so in reality, it’s not as large as the figure suggests. The seat backs do recline, though, making it easier to accommodate awkward-shaped loads while still carrying passengers in the back seats. 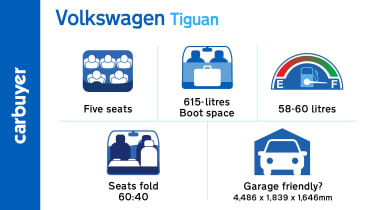 The seats also fold flat, so there’s no step to obstruct long loads. In this configuration, boot capacity grows to 1,655 litres, but the Skoda Yeti offers more when its seats are lowered, with 1,760 litres. At least the Tiguan has a low boot floor and a square-ish profile, which makes loading long or bulky objects much simpler.

The Tiguan is a capable tow car – even the 1.4-litre TSI petrol version has a towing capacity of 1,800kg (the Qashqai’s maximum), while the most powerful versions can manage 2,200kg. This last figure exceeds the maximum towing capacities of the BMW X1, Honda CR-V and Nissan X-Trail – all of which can pull a 2,000kg trailer at most.