The VW Tiguan looks and feels well built, but owners marked it down in the 2014 Driver Power owner satisfaction survey

The Volkswagen Tiguan looks and feels well built, but owners marked it down in the 2016 Driver Power customer satisfaction survey. It finished 92nd out of 150 cars, with owners criticising its reliability, high running costs and uncomfortable suspension.

At least it's safe, though: Euro NCAP awarded the Tiguan the top five-star rating for its crash-test performance, although it was marked down quite badly for pedestrian protection.

The Tiguan's poor showing in our Driver Power 2016 survey is a surprise. Its smaller sister car, the Golf, charted higher. Among the SUVs doing better than the Tiguan were the Skoda Yeti – which came 16th – the Mazda CX-5 and the Ford Kuga.

The VW’s three-year/60,000-mile warranty is merely average for the industry, whereas Kia has the confidence to offer seven years and 100,000 miles of cover. 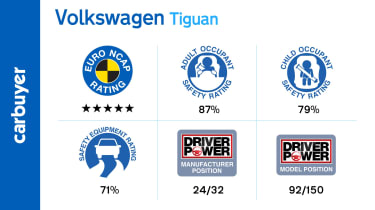 The Tiguan earned the maximum five-star rating when it was crash-tested by Euro NCAP. It scored a respectable 87% for adult occupant protection but only 79% for child protection. In contrast, the Nissan Qashqai scored 88% and 83% respectively. The same car scored 79% for its safety assistance features, compared with the Tiguan’s 71%.

On the subject of safety equipment, as with all Volkswagens from the Golf upwards, the Tiguan includes six airbags, electronic stability control and emergency braking assistance. Options include lane-keeping assistance (which keeps the car in its lane by making gentle steering corrections to the steering) and automatic emergency braking.

High-beam assistance, which automatically dips you headlights when it detects a car coming the other way, is also an option. The car’s high seating position and (on some models) four-wheel drive, could be seen as contributing to safety, too.