"Despite its reasonable initial cost, the Volkswagen Tiguan has higher running costs than some of its main rivals.”

The Volkswagen Tiguan is a small SUV that competes with rivals like the BMW X1 and Audi Q3, despite being cheaper than these cars. It's a competent and well built car that is good to drive, but it's worth noting that Volkswagen recently released a new Tiguan.

First released in 2007, the current Mk1 Tiguan is available in four trim levels, ranging from the S to the top-of-the-range R-Line Edition.

The mid-range Match Edition is our favourite, primarily because it’s the only spec that allows you to choose between two or four-wheel drive (the latter known as 4Motion). We’d recommend two-wheel drive, as 4Motion only gives the Tiguan limited off-road ability and reduces its efficiency. 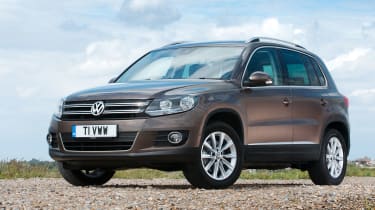 All models come with 2.0-litre diesel engines, with a range of power outputs: 108, 148 or 181bhp depending on the exact version.

While the entry-level car only gets the least powerful engine, Match Edition gives you the choice of the two more powerful options. The Escape trim is only available with the 148bhp engine, however that’s likely to be the most popular choice given that the 181bhp engine isn’t available with two-wheel drive.

Even though it uses Volkswagen’s efficiency-boosting BlueMotion technology, the Tiguan only returns up to 48.7mpg fuel economy with the two less powerful engines. In comparison, the Audi Q3 can return up to 62.8mpg from its 148bhp 2.0-litre TDI engine, while the equivalent BMW X1 returns 49.6mpg. 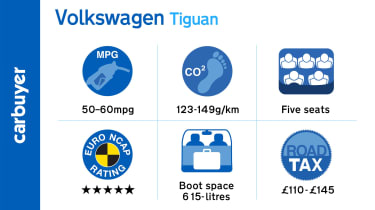 The Q3 also outperforms the Tiguan for emissions, emitting around 117g/km for £30 annual road tax, as opposed to the Tiguan’s 130g/km output, which means it costs £110 a year to tax. With the more powerful 181bhp engine and four-wheel drive, that figure goes up to £130.

Inside, the Tiguan Match Edition offers sat nav, parking assistance – something that’s only available on the highest-spec Audi Q3 – DAB radio and Bluetooth connectivity. The R-Line Edition mainly offers a sporty interior in addition to all the benefits of the mid-range trims, plus it only costs around £600 more than a top-of-the-range Nissan Qashqai SUV – again showing Volkswagen’s reasonable pricing.

The VW Tiguan handles well on the road, leaning very little when cornering thanks to its firm suspension. Rivals like the Mazda CX-5, however, do feel slightly more agile given they’re lighter than the VW.

The Tiguan was awarded the full five stars by Euro NCAP in crash tests and has plenty of safety features, including six airbags, electronic stability control and ISOFIX child-seat mounts.