Few buyers will chose the Volvo XC60 over its rivals on the grounds of economy, as there are more efficient choices out there. However, some of the Volvo’s engines are fairly thrifty and cost-effective – just not the petrol.

There's a clear favourite when it comes to choosing an engine for the Volvo XC60 – the D4 diesel fitted to front-wheel-drive models. This 2.0-litre engine produces CO2 emissions of just 117g/km, for road tax of £30 a year (if registered before April 2017) and fuel economy of 62.8mpg.

The four-wheel-drive versions all use a 2.4-litre diesel, but CO2 emissions go up to 137g/km for a £130 annual tax bill on manual models, while fuel economy drops to 54.3mpg. An automatic gearbox is optional, but increases running costs further.

The D5 version, meanwhile, adds power, but also costs more to run and is less sophisticated than than the more up-to-date D4. It won't return more than 49.6mpg with the automatic gearbox and its CO2 emissions translate to annual road tax of £145. 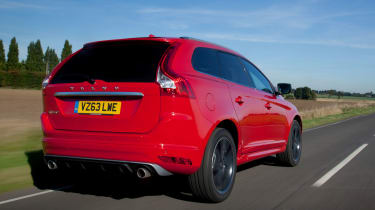 Volvo also offers service plans (prices vary according to model) that cover your car for six years or 10 separate services and allow you to make interest-free monthly instalments rather than a single lump sum. Sign up for this scheme and you get free Volvo roadside assistance, as well as free updates for your car's sat-nav system.

The Volvo XC60 is covered by a three-year/60,000-mile warranty, which is relatively standard across the industry.