"The Volvo XC60 is an appealing contender in the popular SUV class, with attractive yet unshowy looks and affordable running costs. It’s starting to show its age, though"

Some SUVs have a reputation for being brash, but the Volvo XC60’s Scandinavian design manages to dodge this bullet, while still being handsome and practical. Going wheel-to-wheel with the BMW X3, Audi Q5, Land Rover Discovery Sport and Mercedes GLC, the XC60 certainly needs to be good, especially when cheaper models like the Mazda CX-5 and Hyundai Tucson are nipping at its heels, too.

The XC60’s main strengths are its understated charm, comfort and safety. While beauty is subjective, we think the XC60 still looks great, partly because despite being on sale for a while now, Volvo has given it a few tweaks along the way. It succeeds on the comfort front too, with a smooth ride and first-class seats, along with a relaxing cabin ambiance courtesy of attractive materials.

We can’t knock it for safety either, with Euro NCAP awarding it the full five stars after independent crash-testing, along with an impressive 94% for adult occupant protection. 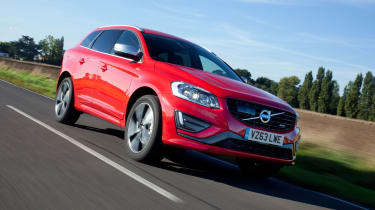 Perhaps our main criticism is the fact the XC60 is starting to feel a bit dated, particularly in terms of its in-car technology. Mercedes, Audi and BMW all offer far more sophisticated infotainment systems, as does Volvo in its newer Volvo XC90 model, so you’ll need to decide how important that is to you.

A fairly straightforward line-up includes two diesel engines and one petrol, with the most popular being the D4 diesel with 188bhp and D5 diesel with 218bhp. The D4 is available with front or four-wheel drive and the D5 sends power to all four wheels as standard. The D4 can return up to 62.8mpg with two-wheel drive or 54.3mpg with four-wheel drive, which has identical figures to the D5, including annual road tax ranging from £30 to £145 if registered before April 2017 when the system changes.

The petrol carries the T5 badge and gets from 0-62mph in 7.2 seconds with a standard automatic gearbox and four-wheel drive thanks to its 242bhp 2.0-litre turbocharged engine. Unsurprisingly, it also has the highest running costs in the range, with fuel economy of 42mpg and annual road tax of £185 if registered before the end of March 2017.

R-Design versions get a sportier look, with interior and exterior styling tweaks which make the XC60 look faster and a touch more modern. Safety features heavily in the equipment roster too, helping the XC60 achieve its five-star Euro NCAP crash-test rating.