Customers don’t rate it as highly as they used to, but the Volvo XC60 is still a well liked family car

Having not featured in our 2015 Driver Power survey, the Volvo XC60 first appeared in the rankings in 2016, finishing in 33rd place overall. It can't compete with fresher models such as the new BMW X3, which finished 12th overall. The Volvo received an excellent score when it was crash-tested by Euro NCAP in 2009 and we'd expect it to perform well even in the more stringent tests carried out since 2014.

The Volvo XC60 finished in 33rd place out of 150 cars surveyed in our 2016 Driver Power survey, with owners happy with reliability and extremely impressed with the car’s seats, practicality, performance and build quality. The way the XC60 handled wasn’t singled out for praise, though. 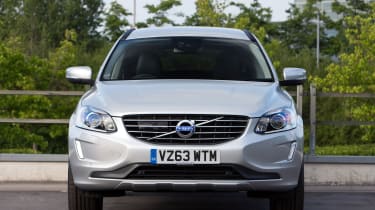 With Volvo's excellent reputation for safety – the company owns one of the most advanced crash-test facilities in the world – it's hardly a surprise to see the XC60 received a five-star ranking from Euro NCAP. It comes with a comprehensive armoury of safety features, including dual-stage airbags, anti-whiplash head restraints, traction control, electronic stability control and a blind-spot warning system. Hill-descent control makes it easy for novices to drive the car down steep off road inclines.

The Volvo XC60 was also one of the first cars to feature automatic emergency braking. Called City Safety, it can detect an imminent collision at speeds of 2-31mph and warn you to take action, before applying the brakes automatically. Unlike many rivals' systems, Volvo's City Safety can also detect pedestrians.