"The SEAT Altea XL is a good choice for families looking for an engaging drive from a practical, good-value car."

The SEAT Altea XL is a good-looking MPV that's designed to compete with cars such as the Ford C-MAX and Renault Scenic. It's just as much fun to drive as the standard Altea, and the diesel engines on offer have a good balance of power and efficiency.

Equipment and accessories are decent, while the boot is 123 litres bigger than the standard Altea’s. The back seats can also slide back and forth to maximise boot space or accommodate passengers with long legs. The Altea XL is based on the Volkswagen Golf, so solid build quality is a given and the SEAT also undercuts a similarly equipped Renault Scenic by around £1,500. As all Altea XLs now have diesel engines, they're cheap to run, too.

All engines achieve more than 40mpg

The most economical Altea XL is the 103bhp 1.6-litre TDI Ecomotive, which returns 62.8mpg fuel economy and emits 119g/km of CO2, so it'll cost £30 a year in road tax. Choosing the DSG automatic gearbox reduces economy to 57.6mpg, while CO2 emissions increase to 129g/km and road tax is £105 annually.

The more powerful 137bhp 2.0-litre TDI returns around the same figures. Efficiency is good across the range thanks to stop-start technology, brake energy regeneration and a gearshift indicator, which recommends the most efficient gear to be in at any given time.

The more powerful 137bhp 2.0-litre TDI diesel, which is only available with the SE specification, accelerates the Altea XL from 0-62mph in 9.8 seconds and on to a top speed of 125mph, all while offering a good blend of speed and economy.

All the other models top out at 114mph and accelerate from 0-62mph in between 11.3 and 12.6 seconds. Both diesels suit the Altea XL much more than the old petrol engines, which have now been dropped from the range. The steering is accurate and the brakes are responsive, plus there's very little body roll when driving through corners for a car this tall.

The SEAT generally feels composed and safe on the move, but isn’t as much fun to drive as the Ford C-MAX.

Sporty models are too firm

The Altea XL isn’t the most comfortable MPV on the market, and the diesel engines can be clattery when driving at low speeds, but this gets better on the open road. There’s also some wind buffeting around the front doors, which can be irritating on the motorway. If you choose the larger 17-inch alloy wheels, the ride gets particularly jittery on rough roads, so we’d recommend giving them a miss.

With the standard 60:40 split-folding rear seats in place, the Altea XL offers a generous 532 litres of boot space. With the back seats lowered, that space increases to 1,604 litres. There's also some extra storage underneath the boot floor, and the parcel shelf has its own built-in cubbyhole.

The rest of the interior is pretty practical, too, offering a range of useful storage compartments. One downside is that the back seats can’t be removed, which is a common feature in many of the Altea XL’s rivals.

SEAT didn’t get a single car into the Driver Power 2013 customer satisfaction survey’s top 100, but the good news is that the highest-ranking SEAT in the top 150 was the Altea. SEAT didn’t have a great year in the survey, dropping three places in the manufacturer rankings to come 27th out of 32 brands. That's quite poor when you consider that Skoda, which shares many parts with SEAT, finished second overall.

As you'd expect, SEAT Altea XL interior quality is good, but it's not quite up to Volkswagen standards. Although the Altea XL hasn’t been put through the Euro NCAP crash safety tests, the standard car was awarded the maximum five-star rating for adult occupant protection, so we'd expect the XL to follow suit.

The Altea XL should be relatively cheap to insure, with the basic model carrying a group 11 rating, rising to group 18 for the 2.0-litre SE. 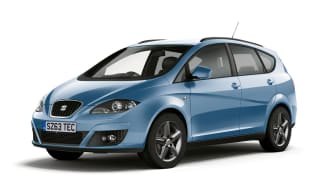