SEAT’s reputation for reliability is improving, and the SEAT Ateca is based on solid and safe underpinnings 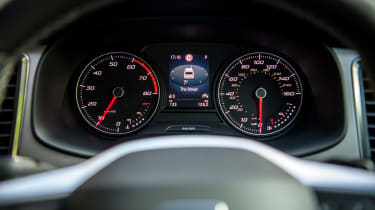 The Ateca is based on the same MQB platform that sits underneath such cars as the Skoda Octavia, Audi TT and the Volkswagen Tiguan. This means many of its parts are tried-and-tested and found in many other cars from a range of brands – especially the SEAT Leon hatchback, cars which have good reliability records and excellent safety ratings.

The SEAT Ateca finished in 31st place out of the top 75 models in our 2020 Driver Power owner satisfaction survey, which might be disappointing news for SEAT bosses. The SEAT brand itself however, scored slightly better, coming in 14th place out of 30 manufacturers. Owners praised their cars for the way they drive, with handling, ride and acceleration held in high regard. SEAT's infotainment technology is also widely liked, both in sophistication and ease of use.

Exterior style and fit-and-finish weren’t cause for celebration, though, and owners weren't especially impressed with the running costs of their cars either. Fuel consumption and servicing fees were rated as being rather more expensive than owners would like. Around 17.4% of those who participated in our survey reported one or more faults in the first year of ownership.

The SEAT Ateca was awarded the full five stars after independent Euro NCAP crash-testing, which is an excellent result. Specific ratings include 93% for adult protection and 84% for child occupant protection, only falling to 71% for pedestrian protection.

The Ateca has a number of supplementary systems fitted either as standard, or available as options. Key safety systems include lane-departure warning, autonomous emergency braking and active cruise control. All systems are slick to use, plus it’s easy to deactivate them if you want using the menus on the touchscreen display.