The SEAT Ateca should be cheap to run, and runs the Nissan Qashqai very close 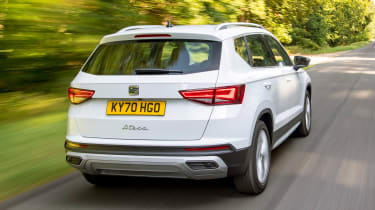 The 1.6-litre TDI diesel has been replaced with a 2.0-litre TDI with the same power output but twin-dosing of AdBlue fluid to reduce tailpipe emissions. With a low CO2 figure, business users stand to benefit from a low-ish Benefit-in-Kind (BiK) company-car tax liability. The 2.0-litre diesel is also available with 148bhp, with manual or automatic gearboxes and front or four-wheel drive. All these options have an impact on running costs.

The 148bhp 2.0-litre diesel returns economy of around 50mpg and CO2 emissions of around 150g/km depending on which trim you go for. Choose the DSG automatic and four-wheel drive, and it drops to more like 45mpg according to the official stats.

The 148bhp 1.5-litre petrol engine is impressively economical thanks to cylinder-deactivation technology that shuts down part of the engine when full power isn't required. This means the engine is capable of over 40mpg. It has a lower BiK band than the 2.0-litre TDI, which business users will appreciate, and should make financial sense to those who cover low annual mileage or make frequent short, urban journeys.

The 1.0-litre TSI can return up to 43.5mpg. It should prove cheap to run, but overall the 1.5-litre is likely to be worth the extra expense for private buyers.

The least economical petrol engine is the 187bhp 2.0-litre TSI. This is not only because it’s the most powerful but also because it comes with an automatic gearbox and four-wheel drive as standard, so can only manage around 33mpg.

Road tax on all models will cost £150 a year, after an initial registration cost that usually forms part of a car's on-the-road price. 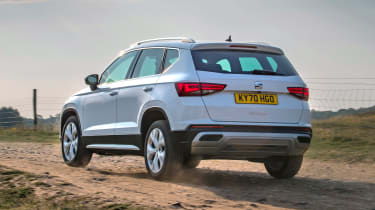 The SEAT Ateca should be reasonably cheap to insure, with the 1.0-litre version sitting in groups eight and nine, which are very low for an SUV. The 1.6-litre diesel is in groups 10 to 11, while the 1.4-litre starts in group 13. The diesel with 187bhp in FR trim is the most costly in group 23.

The SEAT Ateca’s warranty is a fairly standard three-year/60,000-mile affair, like every other model in SEAT’s range. That’s less than the four-year cover that comes with the Renault Kadjar, the five years of the Hyundai Tucson and seven years of the Kia Sportage. You can pay to extend it if you wish, with a four-year or 75,000-mile warranty costing £280 and cover for five-years or 90,000-miles setting you back around £450.

SEAT offers a fixed-price servicing plan for the Ateca, covering you for the first two years (or 20,000 miles) for an upfront payment of £414. Alternatively, you can pay 18 monthly fees of around £23 a month to help spread the cost.