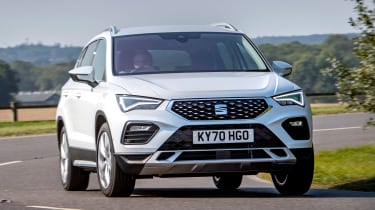 Gone are the days when driving an SUV meant slow acceleration and steering that required more blind faith than precision. The SEAT Ateca is up there with the best of its rivals, boasting light yet accurate steering that allows you to corner with confidence - it's far more fun than the Kia Sportage or Nissan Qashqai.

The suspension is a little on the firm side, but not so much that it’s uncomfortable unless you go for the optional 19-inch alloy wheels. While long-distance motorway drivers might prefer a little more give in the suspension, it does at least mean that the car can tackle corners in a composed manner, without the body lean that afflicted older SUVs.

You can change the character of the car using a switch on the centre console, which can alter the response from the accelerator pedal, the weight of the steering and the speed of the gearshifts, if you’ve chosen an automatic model. Unlike cars such as the Volkswagen Tiguan, there’s no adjustable suspension, even as an option.

Besides the Cupra Ateca (reviewed separately), the FR model is the sportiest in the range. It comes with a more aggressive bodykit and stiffer suspension, and has been lowered by 15mm. Ironically, the Ateca already handles very well thanks to inherent qualities like the stiffness of the car's body, so the tweaks made for the FR version don't really make a huge difference. If you really want a sporty Ateca, you'd be better off choosing the fast Cupra model because the FR isn't significantly better to drive than the cheaper SE Technology model. 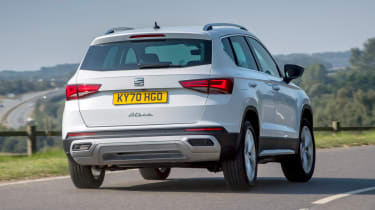 The 1.6-litre engine has been replaced by a 2.0-litre engine for the facelift, with the same 113bhp as before. The 2.0-litre TDI engine also comes with 148, but the 187bhp version has been shelved for now. The 148bhp engine is the best all-rounder, with a six-speed manual gearbox and front-wheel drive as standard, but a DSG automatic and four-wheel drive are also available. It gets from 0-62mph in 8.8 seconds, which is reasonably brisk for the class.

The 1.5-litre TSI engine develops 148bhp, enabling a 0-62mph time of around 8.5 seconds. It delivers its power in a nice, smooth way, pulling effortlessly away from a standstill and feeling reasonably punchy all the way to cruising speeds. It does lack the overtaking thrust that you get from the 2.0-litre diesel engines but overall it's our pick of the range.

The cylinder deactivation technology that helps the Ateca 1.5-litre to return a claimed fuel economy of over 42.2mpg – and broadly similar running cost to the 1.0-litre engine – is barely perceptible: you never notice it even when half the engine is shut down and you’re only running on two cylinders. The system reacts very quickly and there’s no hesitation at all when you put your foot down. The final advantage of this engine is its low weight, which helps to make the front end of the car feel more nimble than the diesels around the corners.

The smallest 1.0-litre three-cylinder engine is both quiet and smooth and provides greater performance than its compact size would suggest. SEAT tell us it'll power the Ateca from 0-62mph in 10.7 seconds, which, although not earth-shattering, may well be plenty for the average around-town motorist.

Irrespective of what the stopwatch says, the 187bhp 2.0-litre TSI petrol doesn't really feel any quicker than the 1.5-litre. It has a lower 0-62mph time of just under eight seconds, but this extra urge is disguised by the standard DSG automatic gearbox, which changes gears swiftly but rather saps excitement. We prefer the slick-shifting six-speed manual of the 1.5-litre and truly sporty drivers are advised to check out the Cupra Ateca.