The SEAT Ateca has space for five and their luggage, so it makes an ideal family car 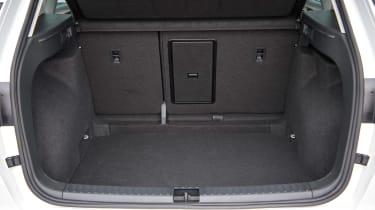 The Ateca will be bought largely by people with families, so it needs to be roomy and easy to get in and out of, with a large boot for all occasions. It certainly delivers on this – the Ateca has a bigger boot than two of its biggest rivals, the Nissan Qashqai and Renault Kadjar.

Access to the Ateca is good thanks to its raised ride height. There are low door sills and it’s a tall car, so it’s very easy to get in and out of – especially for older passengers or those with small children. The doors open nice and wide, too, but the opening itself is quite narrow.

It’s easy to get comfortable in the front thanks to plenty of adjustment in the seats and plenty of room. You get a clear view out and the large glass area allows lots of light in for an airy feel. The door bins are a decent size, but they’re not huge. The same goes for the glovebox, which seems quite small.

Rear-seat passengers will have few complaints, though, as the Ateca has plenty of space for adults in the back, with good legroom and decent headroom thanks to its square roofline – three will fit in with ease. 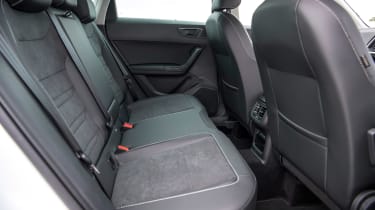 The Ateca is slightly shorter than the VW Tiguan, with which it shares many components, but at 510 litres, it still has a generous amount of boot space. For comparison, the Renault Kadjar and Nissan Qashqai will hold 472 and 430 litres respectively, while four-wheel-drive versions of the Ateca have 485 litres to make space for the four-wheel-drive system.

To boost practicality, there’s wide but shallow underfloor storage and tie-down points, while the rear seats both split 60:40 and fold down. They don’t leave a flat load area, though: there’s quite a pronounced step, which means it won’t be easy to slide large, heavy items in. The seats can be folded using a lever in the boot, though.

While it isn't a full-sized SUV like a Land Rover Discovery, the SEAT Ateca should still be more than capable of towing a small to medium-sized caravan or small trailer. Even the 1.0-litre can tow a 1,300kg braked trailer, while the 1.6-litre TDI increases the limit by 200kg.