SEAT's reputation as a quality manufacturer isn't set in stone but encouraging owner feedback demonstrates that it has its fair share of satisfied customers. Its latest models are packed with technology, too, much of which is designed to keep you safe in a crash or lessen the chances of one happening in the first place. The Tarraco scored very well in Euro NCAP testing as a result.

SEAT placed 14th out of 30 brands in our 2020 Driver Power owner satisfaction survey, beating Volkswagen, Audi and Land Rover in 19th, 21st and 25th places respectively. The brand scored highly for handling, while its infotainment systems and connectivity were praised, but build quality was less highly lauded. Just over 17% of respondents complained of at least one fault in the first year of ownership. 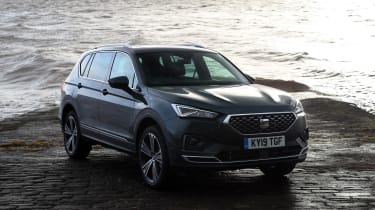 SEAT claims that Tarraco is a class leader for safety technology and that was borne out by a five-star Euro NCAP score, which included a 97% rating in the adult occupant category and a very respectable 79% for safety assist.

Additional technology includes blind spot detection, traffic sign recognition and automatic headlamp main beam. The Tarraco also debuts SEAT's pre-crash assist system. This is claimed to react in 0.2 of a second to prepare occupants for an impact, tightening seatbelts, closing windows and the sunroof, and activating the hazard warning lights to increase safety during and after a crash. There's a new rollover assist system, too, which will automatically turn the engine off, make an emergency call, unlock the doors and activate the hazard lights if the car should roll over.