The Tarraco proves to be an enjoyable SUV to drive, if your expectations don't run to sports car handling. For such a bulky SUV, the Tarraco turns into corners keenly with a sharp response from the steering when you turn the wheel, and it doesn't lean over as much in corners as you might expect.

The Tarraco feels more engaging than the Kodiaq, in keeping with SEAT's image as the 'sporty and fun' division of the Volkswagen Group, thanks in part to sitting 20mm lower than the Kodiaq. It's slightly more fun to drive than rivals like the Kia Sorento but while it can compete with the Land Rover Discovery Sport on road, it's not as adept off it. Four-wheel-drive versions are perfectly capable of tackling slippery grass car parks and rutted tracks, but they aren’t intended for hardcore off-roading. 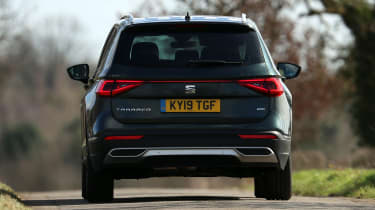 The engines offered for the Tarraco have been proven in other cars from within the Volkswagen Group – the turbocharged 148bhp 1.5-litre petrol, for instance, has already featured in the SEAT Ateca and SEAT Arona SUV, as well as a host of other models from VW and Skoda. It's smooth, quiet and free of vibration, and is well up to the task of powering this big seven-seat SUV on most roads. It can manage 0-62mph in 9.9 seconds with a manual gearbox, dropping to 9.5 seconds if the DSG automatic is fitted.

However, it feels a little overwhelmed on steep hills when laden with passengers and luggage, and isn't always as eager as you might like when accelerating out of slow corners. The standard six-speed manual gearbox is fairly smooth, but feels slightly at odds with the big Tarraco, which is better suited to an automatic transmission for fuss-free driving.

You can team a more powerful 187bhp, 2.0-litre TSI petrol engine with SEAT's 4Drive all-wheel drive system and DSG automatic gearbox, but it feels rather taxed under the extra weight, losing some agility. Acceleration from 0-62mph takes eight seconds, while its top speed is 131mph.

If four-wheel drive is important to you, we recommend you choose the range-topping diesel engine, which has more pulling power and is better suited to the Tarraco when it's fully laden. There are two to choose from, both 2.0-litres in size and producing 148bhp or 197bhp. They get from 0-62mph in 10.2 and 7.8 seconds respectively and the latter feels punchier than the petrol.