The Tarraco is the first seven-seat car from SEAT that isn't a people carrier. The SEAT Alhambra MPV was withdrawn from sale in 2020 but a used example remains a better choice if you often need to carry a full complement of seven passengers – the Tarraco's third row of seats is better suited to occasional use by children.

Judged as a spacious five seater with space for additional passengers if the need arises, the Tarraco makes a very versatile family SUV. Nobody sitting in the first or second row of seats will have any cause for complaint when it comes to space. There's enough driving seat adjustment to suit drivers of all sizes, and the Tarraco's generous width allows plenty of shoulder room between driver and passenger. 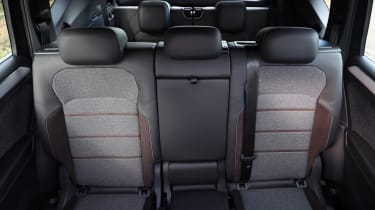 Shoulder room isn't lacking in the back, either, where three adults can sit comfortably, although two will be better able to stretch out on a longer journey. By contrast, the third row of seats really are best suited to young children, and we suspect that many owners will choose to leave them folded out of use much of the time.

SEAT claims a 700-litre boot capacity when the Tarraco is in five-seat mode, and you can liberate 1,775 litres by stowing the 40:20:40 split and fold second row of seats. That puts the Spanish car slightly behind the 720-litre Skoda Kodiaq, which also provides a huge 2,005 litres with the second row of seats folded away.

The centre part of the boot floor is flat, even when the third row of seats is folded down, but the flat section is bordered by a deep well on either side that the false floor doesn't fully conceal. However, it's a shame the Tarraco misses out on some of the Kodiaq's practical features, such as umbrellas in the doors and an ice scraper in the fuel filler door.

Every Tarraco can tow an unbraked trailer weighing up to 750kg, but the four-wheel drive versions are best for towing heavy loads like a large caravan or horsebox. The 2.0-litre diesel can haul up to a 2,300kg braked trailer, while the petrol of the same size can tow 2,250kg.