“The SEAT Toledo is a spacious family car with low running costs, but it’s unlikely to excite”

The SEAT Toledo looks like a four-door saloon, but a large hatchback means it’s more practical for families than first appears. Sitting between the Ibiza and Leon in SEAT’s model line-up, the Toledo offers lots of space for a reasonable price and shares most of its parts with the Skoda Rapid. Its styling is slightly more sporty in keeping with SEAT’s youthful image, but its conservative shape still looks traditional next to most rivals.

Along with the Skoda Rapid, the Toledo goes up against affordable and practical hatchbacks like the Hyundai i30, Vauxhall Astra and Kia Cee’d, while you could also consider a Dacia Logan MCV estate or head upmarket and bag yourself a Volkswagen Golf.

With the Toledo’s 550-litre boot, you certainly shouldn’t be troubled for space, because it has 170 litres more capacity than the Volkswagen. Rear legroom is excellent, too, so it’s hardly a surprise the Toledo has proved popular with minicab drivers as well as families.

The interior feels sturdy and everything is easy to find thanks to all the controls being logically laid-out. There’s something missing, though, and that’s excitement, because the Toledo feels functional to the detriment of fun. The Ibiza and Leon are both more stylish inside and feature newer technology to keep you connected.

The engine range is more limited than for most models, too, consisting solely of a 1.0-litre three-cylinder petrol with 109bhp that returns up to 60.1mpg and gets the Toledo from 0-62mph in 9.9 seconds.

Get behind the wheel and the Toledo drives as its looks suggest, failing to excite on fun roads, but being perfectly easy to drive around town and fairly accomplished on the motorway. The main negative is a relatively firm ride at lower speeds, which can send jolts into the car.

The Toledo didn’t appear in our 2018 Driver Power owner satisfaction survey, but the SEAT brand was ranked 14th out of 26 manufacturers. We do know for certain that the Toledo should be safe in a collision, thanks to a five-star rating from independent crash-test body Euro NCAP.

All engines are cheap to run and affordable for business users

The whole Toledo range should be fairly inexpensive to run. The turbocharged petrol 1.0-litre TSI is a great choice for low to average-mileage drivers, because not only is its 61.4mpg fuel-economy impressive, it also qualifies for the 22% BiK band and costs around £2,000 less to buy.

After the first year's CO2-based road tax (generally included in the on-the-road price), all SEAT Toledos cost £140 a year to tax. SEAT offers a fixed-price servicing plan that covers maintenance for the first two years/20,000-miles for around £400 upfront or £23 a month for 18 months. Extended four and five-year warranties are also available for roughly £250 and £450 that could be worth considering if you plan to keep hold of the Toledo.

Doesn’t do much wrong on the road, but it’s not very exciting

Out on the road, the Toledo is resoundingly middle of the road. So, it’s good around town and strong on the motorway, but no better than its main competitors.

The 1.0-litre TSI petrol and the 1.6-litre TDI Ecomotive diesel both accelerate from 0-62mph in around 10 seconds, which is more than enough performance for driving around town and just about enough for driving on the motorway. The petrol engine comes with a six-speed manual gearbox that feels well suited to the car, while the diesel has a five-speed manual.

There isn’t a huge amount of fun to be had on winding roads, though; this isn’t a car you’d take out of the garage for a drive in the name of fun. However, its steering is responsive and the pedals nicely positioned, making it easy to use, predictable and safe.

Comfortable, but bumps can be clearly felt around town

Like many aspects of the Toledo, its comfort is reasonable, but lacks the final polish of the best cars.

The nicely cushioned suspension easily irons out most big bumps and potholes, while the interior is insulated enough for a conversation to be possible without shouting, even on the motorway. That said, there’s more audible wind and road noise than you get in a lot of other family cars like the Vauxhall Astra, but given its price, the Toledo does pretty well.

The seats are comfortable and supportive enough and there’s plenty of adjustment in the driving position – including for reach and rake in the steering wheel. The interior is a little plain Jane, but the dashboard and controls are cleanly and logically laid out. The only real negative is when you’re travelling at slower speeds around town, the suspension has difficulty settling down, which has the effect of making the Toledo feel quite jittery at times.

Trim levels start with SE, which get a five-inch monochrome touchscreen and Bluetooth, along with rear parking sensors, air-conditioning and a leather steering wheel and gearknob.

The SEAT Toledo’s boot is larger than many estates, plus there’s plenty of rear legroom

The Toledo’s roomy dimensions mean that it offers a pretty substantial 550 litres of boot space, which is bigger than you’ll find in a Peugeot 508 SW estate and a full 170 litres more than in the standard hatchback Volkswagen Golf.

Because the hatchback boot allows for easier access to all luggage, the Toledo is more practical than it looks from the outside, and you can easily fold down the rear seats to expand the load area even more. Every model also gets split-folding rear seats, but no version folds flat, leaving an awkward load lip in the way when sliding objects in.

Another disadvantage is that the loading lip and sheer length of the boot floor means it can be quite hard to reach objects in the recesses of the boot. There’s plenty of legroom in the back, with enough headroom for four tall adults to squeeze in with relative comfort.

There’s plenty of legroom in the back, though, with enough headroom for four tall adults to squeeze in with relative comfort.

The SEAT Toledo didn’t appear in our 2018 Driver Power owner satisfaction survey, but the brand itself performed ranked 14th out of 26 manufacturers. Our results showed that 10.9% of SEAT owners reported a fault in the first year of ownership.

The fact the Toledo is also relatively simple and uses lots of parts and technology shared with numerous Volkswagen Group models should provide reassurance, even if SEAT’s three-year/60,000-mile warranty looks a bit short compared with the cover provided with some rivals like the Hyundai i30 and Kia Ceed.

It secured the maximum five-star rating in Euro NCAP crash safety tests, with anti-lock brakes (ABS), electronic stability control (ESP) and a host of airbags, including front, side, head and additional chest airbags all being fitted as standard. The Xcellence model gets foglights with a cornering function to help illuminate junctions and sharp corners.

The SEAT Toledo is great value given the space on offer

The Toledo isn’t a car we’d recommend if you enjoy lavishing a car with options, as there are only a handful available.

It’s a shame SEAT charges £200 for DAB radio on the SE trim and £150 for its Full Link connection (enabling Apple CarPlay, Android Auto and MirrorLink smartphone compatibility for SE and Xcellence Toledos), as these are standard in most rivals and even other models within the SEAT range like the SEAT Ibiza supermini.

Costing from just over £17,000 to around £19,000, the SEAT Toledo isn’t outrageously priced for a spacious family hatchback, with economical engines and a reasonable amount of kit, but it also perhaps isn’t the bargain it should be. Not only is the Skoda Rapid noticeably cheaper, there are simply more enticing rivals available for a similar price.

If you need something larger, there are plenty of competitors like the Vauxhall Astra and Hyundai i30 to consider, but the elephants in the showroom are the SEAT Ibiza and SEAT Leon, which are simply much better looking, far more fun to drive and should hold their value better than the Toledo. Unless you really need the Toledo’s big boot, they’re both easier to recommend. 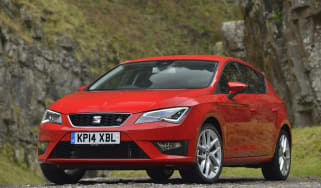 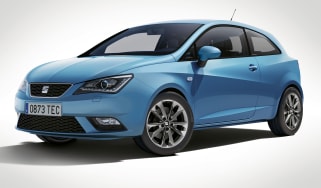 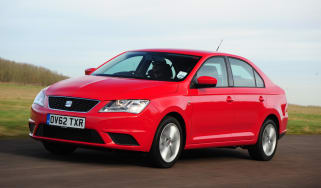 The SEAT Toledo hatchback now costs from just £10,000
Skip to ContentSkip to Footer