The Skoda Octavia Estate is smooth and quiet 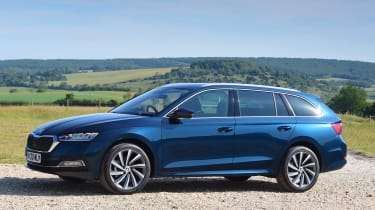 We’ve driven the Octavia Estate on both the roads of the Czech Republic and in the UK, where its improved qualities shine through. It’s a significant step forward from the old car, with the tweaked suspension setup offering a composed drive and an excellent level of refinement that’s only occasionally upset by the very worst road surfaces. With optional adaptive DCC suspension fitted, the chassis does a great job of taking the sting out of harsh bumps, making it a relaxing car to drive. The car’s on-road refinement has also been improved, with extra sound insulation reducing tyre and road noise.

A selection of driving modes are offered, including Eco, Normal, Comfort and Sport. During our test, we found Normal mode to be the best all round setting, offering a decent blend of refinement with a smooth ride and light steering. In Sport mode the Octavia feels somewhat compromised, hanging onto gears for too long. Eco mode nullifies the engines responsiveness to the point where you simply have to work it harder to make decent progress.

Through corners there's good balance, despite the Estate's extra length compared to the Volkswagen Golf with which it shares its underpinnings. While a Ford Focus estate is more fun to drive, the Octavia Estate offers a decent level of agility. There is a noticeable amount of body lean in tighter bends, which is the only compromise made for the car’s impressive refinement and comfort. 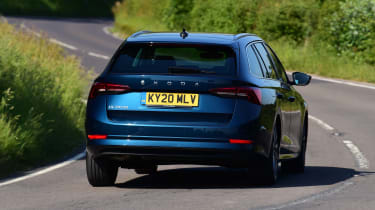 The Octavia Estate is currently available with two petrol engines, namely a 108bhp 1.0-litre and a 148bhp 1.5-litre. Both are equipped with a six-speed manual gearbox, while the 1.0-litre is also available with an automatic and mild-hybrid technology. The 1.5 is capable of 0-62mph in 8.3 seconds; the smaller 1.0-litre engine is noticeably slower, covering 0-62mph in 10.6 seconds.

The Octavia's 2.0-litre TDI diesel may sound familiar but it's a new engine for 2020, replacing the smaller 1.6-litre. At launch, it’s available with two power outputs, the first of which is an entry-level 113bhp version aimed at drivers who value economy over outright pace, with a 0-62mph time of 10.4 seconds. It can only initially be specified with a six-speed manual gearbox, with an automatic option expected to arrive later.

The flagship diesel is the same 2.0-litre engine with a 148bhp output, which is only available with an automatic gearbox but is capable of similar fuel economy to the 113bhp. It’s far quicker off the line, with a 0-62mph time of 8.8 seconds producing strong acceleration from low in the rev range. While it does emit the traditional diesel clatter if you push it hard, once at motorway speeds it operates smoothly in the background.

Its 360Nm of torque certainly feels like plenty for this sort of family wagon and, like in the Golf hatchback, the automatic seven-speed DSG gearbox feels well tuned, with precise and seamless gearchanges. 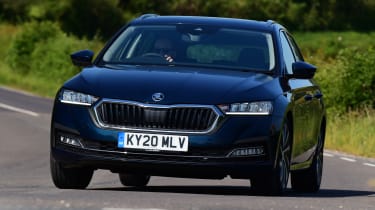 A 197bhp version of the same engine will be added to the range later this year. Of the three diesel engines, the mid-range 148bhp version is likely to be the best all-rounder thanks to its low running costs, and is likely to make up the majority of diesel sales.

While we haven't driven one yet, the Skoda Octavia iV plug-in hybrid should offer private and business buyers a tempting package. Its 1.4-litre turbo petrol engine and electric motor combine to produce up to 201bhp, providing brisk acceleration from 0-62mph in 7.9 seconds. A more powerful version of this package is offered in the Octavia vRS.